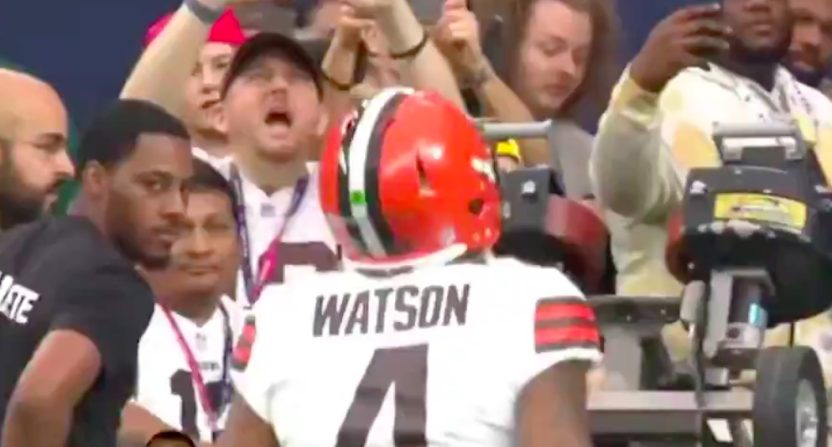 Is there a quarterback controversy brewing in Cleveland?

It seems impossible to believe that could happen, with Deshaun Watson making his long-awaited debut with the Cleveland Browns last Sunday against his former team, the Houston Texans. The controversial quarterback sat out the 2021 season, then after getting traded to the Browns, served an 11-game suspension this year due to sexual misconduct and assault allegations.

Watson looked like someone who hadn’t played in an NFL game in almost two years. Watson passed for just 131 yards and added 21 yards on the ground against one of the NFL’s worst defenses.

So with the Browns (5-7) playing a virtual must-win game this Sunday against the Cincinnati Bengals and Watson still shaking off the cobwebs, a reporter asked Browns coach Kevin Stefanski Thursday if there’s a possibility backup Jacoby Brissett might play.

“No, we’re going down there to win the football game,” Stefanski said (via Mary Kay Cabot, Cleveland.com). “That’s our focus. Deshaun is our quarterback. We’re focused on having a really good day of practice today and having a great day on Sunday. That’s where our focus is.”

“I think personally, I’d like to see [Watson] get as many reps as he can regardless of how it’s going,” Van Pelt said (per Cabot). “We need to work through the rust, get it completely knocked off and feeling good about the end of the year.”

Maybe Watson will perform better without all the drama that surrounded him last weekend as he played in front of a hostile crowd in Houston.

Browns fans aren’t so sure this is going to turn out well.

Most guaranteed money in NFL history and we’re “excusing rust”?

It’s almost as if they knew he would be rusty first game back in 700 days. Who would’ve thought?

Hell, I just want a Win! If D Wat contributes to that, great.