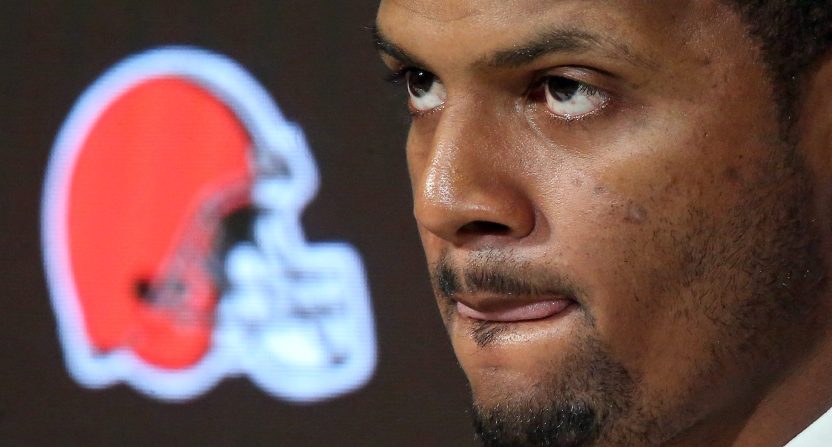 Investigators with the NFL will meet with Cleveland Browns quarterback Deshaun Watson in Texas this week as they continue to review the matter of accusations made against him.

Josina Anderson was the first to report the meeting.

Their investigation involves the 24 massage therapists who have accused Watson of sexual misconduct.

While no criminal charges have been filed against Watson, he is currently preparing for a civil trial that could lead to financial consequences. Watson has denied any wrongdoing.

Meanwhile, the NFL will decide if they feel that Watson has violated their conduct policy and could enact their own suspension or fine regardless of what the courts decide.

NFL Commissioner Roger Goodell previously said that while there is no specific timetable for the investigation, they are taking the matter very seriously.

“We’re taking it very seriously,” Goodell said in April. “The NFL personal conduct policy is the issue that we will be focused on. Our investigators are working on that. When they complete that, then they submit it to a disciplinary officer who is selected by the union and management, and they’ll make a decision at that point in time.

“There’s no timetable on it, obviously the investigation’s still ongoing, we’re going to take it seriously.”

The Browns have faced plenty of scrutiny over trading for Watson, especially in the way they structured his new contract so that any fines he receives in the upcoming season will minimally impact him financially. Of course, the NFL could also alter their suspension to circumvent that.

Watson is currently planning a trip to the Bahamas along with his offensive teammates, though this meeting is expected to precede that.