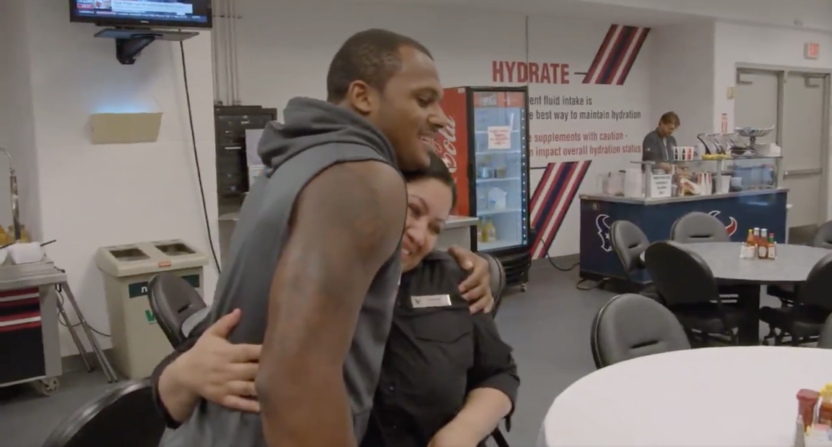 The damage done in the Houston area from Hurricane Harvey took a devastating toll on so many people, including employees of the Houston Texans. The storm saw Texans linebacker J.J. Watt spring into action for an incredible online fundraising campaign to help as many victims as possible. Now, another member of the Texans is taking it upon himself to help others in need. Rookie quarterback Deshaun Watson offered his first paycheck to three members of the Texans’ cafeteria staff that lost practically everything in the massive storm.

The exchange was captured on video by the Texans and it’s a good thing it was, because it is quite touching. In addition to putting on display the good character of the franchise’s newest quarterback, the emotion and appreciation from the three cafeteria workers is raw and a genuine reminder of just how much a gesture like this can change someone’s life.

“If you can, you must.”@deshaunwatson​ gave his first @NFL​ game check to help a few familiar faces. #HoustonStrong pic.twitter.com/rwcyGMSRFN

“For what you all do for us every day and never complain, I really appreciate you all, so I wanted to give my first game check to y’all to help y’all out in some type of way,” Watson said as he presented the three cafeteria workers with a little financial support.

According to ESPN, Watson’s first game check would come out to $27,353. Splitting that three ways would come out to a little over $9,000 for each hurricane victim, and that can go a long way when you have so much to recover from.

Anyone who has followed Watson over the years from his time at Clemson will probably tell you the quarterback has always had a strong head on his shoulders, and this goes to support that thought. But it is also worth noting Watson himself has benefited from the kindness of others in the past. Watson lived in government housing until he was nine years old when he and his family were presented a house by Habitat for Humanity, courtesy of former NFL running back Warrick Dunn.

Warrick Dunn giving the Watson family the keys to their house in 2006. Deshaun Watson in black sweatshirt on the right. pic.twitter.com/UjGlcIhlkT

From an early age, Watson developed the awareness of the kindness of others and the impact it can have. This latest act of good citizenship from Watson proves he hasn’t forgotten where he came from and how much he is now in a position to truly help others when the need arises.

Between Watt and Watson, the Houston Texans have a couple of stars to be proud of no matter what happens on the field this season.