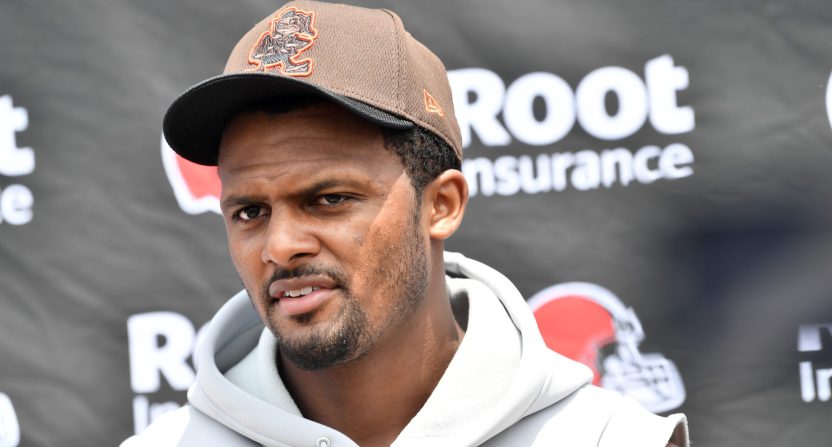 Less than a month before the start of the 2022-23 NFL season, we finally have a ruling on Cleveland Browns quarterback Deshaun Watson after he and the NFL agreed on a settlement of an 11-game suspension.

Watson took part in a press conference Thursday following the settlement’s announcement, where he again maintained his innocence regarding the sexual misconduct allegations he faced.

Deshaun Watson on settling the disciplinary dispute with the #NFL.

“I’ve always stood on my innocence and always said that I’ve never assaulted anyone or disrespected anyone, and I’m continuing to stand on that…”#Browns pic.twitter.com/1Z4Acq92yU

He was then asked why he started his press conference by apologizing if he claims he is innocent, which the three-time Pro-Bowler answered bluntly.

“I’m apologizing for everyone that was affected by the situation,” said Watson. “There were a lot of people that were triggered.”

He was also asked if he apologized to the women that had accused him of sexual misconduct, with his response being that he “apologized to all women” and everyone else that was affected by this “situation.”

Many are confused about Watson’s apologies on the day, especially since he apologized to “all women” but still proclaimed his innocence regarding the sexual assault allegations.

While DeShaun Watson may have finally apologized last week (likely in keeping with the settlement), let’s be clear about one thing: he believes he has done nothing wrong.

the browns and deshaun watson can say he’s innocent but the team had to put together plans and supervision for his treatment and massages. actions are louder than words

Deshaun Watson: “I take accountability for the decisions I made.”

Let’s face it, no suspension would be long enough for what Deshaun Watson is accused of doing. It’s not like if he did receive a full year that would feel like complete justice based on the behavior.

Funny how that works.

It is certainly a bad look for the Browns and Watson for him to show such little remorse that he would make such a half-hearted apology, regardless of whether or not he sees himself as guilty or innocent.

Whether it is a popular decision or not, the NFL’s decision to settle with Watson on a suspension is now final, and we will see him in Week 12 against his former team, the Houston Texans, in December.