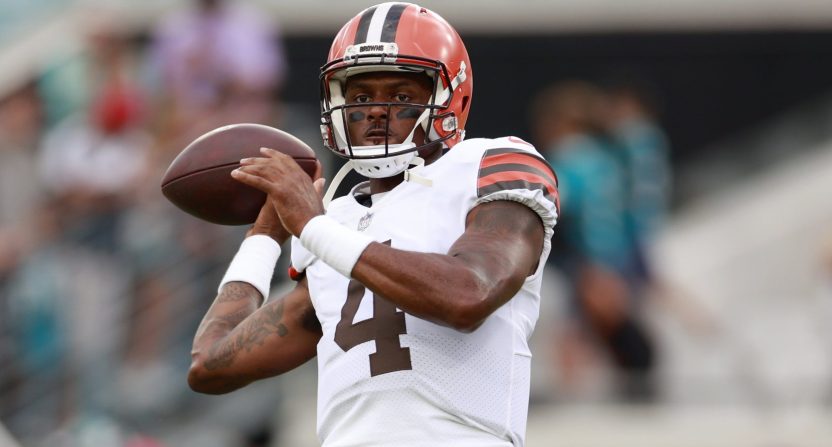 There has been vast speculation throughout the offseason about how long Cleveland Browns quarterback Deshaun Watson will be suspended. Less than a month before the start of the regular season, we finally have our answer.

It was anticipated that a decision would come on the matter within the next few days, whether that be based on the NFL’s appeal being decided upon, or a potential settlement between Watson and the NFL.

The latter occurred on Thursday, as the NFL and Watson agreed on a settlement that will see Watson suspended for 11 games, including a $5 million fine and mandatory attendance at a treatment program.

BREAKING: The NFL and NFLPA have reached a settlement in the Deshaun Watson case: Watson is suspended 11 games and will receive a $5 million fine. Watson will also undergo a treatment program.

Watson will return vs. the Texans, his former team, in Houston.

This ruling will have Watson return for the Browns in Week 12, which is fittingly against the Houston Texans where he has spent the entirety of his career up until this season.

The official decision has many around the NFL world feeling that he could have gotten a much harsher punishment.

11 games probably costs the Browns the playoffs, which makes me happy. I note, however, that a $5 million dollar fine is a pathetic 2% of his contract. https://t.co/MloeRK0jSA

So does this mean he'll publicly admit to doing what the women said he did or will he keep saying they lied despite agreeing to this deal and undergoing treatment? https://t.co/ajLYgc1UIA

Ridley: Indefinite – Bet for his team to win

Others find it very convenient that he just so happens to return against his former team in a game that will be heavily talked about.

Ridiculous that not only can he play this year but the return was set for a TV blockbuster just because the NFL can? https://t.co/Dia9Hh5xp7

So Deshaun returns to play the game against Houston?

Pretty disgusting and despicable maneuver by the NFL. I hate everything about this situation. https://t.co/wcTC7LCRkV

they really jerry-rigged this punishment so he'll return against the Texans, like its Russell Wilson-vs-Seattle and going back to Houston is ~just a fun storyline~ https://t.co/s8hyhlpAP1

Deshaun Watson's first game post suspension will be at the Houston Texans.

Just when I thought I couldn't be more astonished by the shambolic handling of this whole saga. https://t.co/t3PwQ4lq25

Many believed that the NFL appealing Watson’s initial suspension of six games meant that they would attempt to make his suspension for an entire year, but it seems like they ultimately let him off the hook for the most part.

Regardless, this puts an end to the speculation and rumors regarding his suspension, and we will see him again in Week 12 against the Texans.

Unless the Browns potentially make a move for a player like Jimmy Garoppolo to come in during Watson’s absence, it certainly appears that backup quarterback Jacoby Brissett will be the Browns starting quarterback for the first 11 weeks barring any injuries.