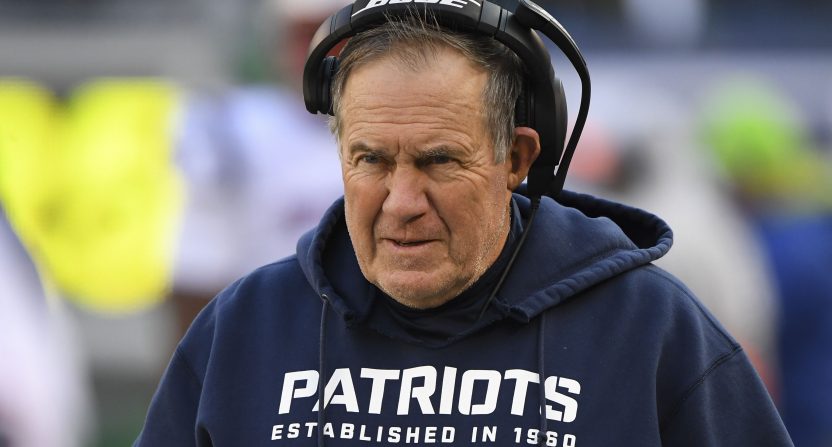 Ever since a videographer was busted for recording the Cincinnati Bengals sideline a month ago, the NFL has been investigating on the New England Patriots’ involvement in this act. A few days ago it was reported that the NFL found no evidence that anyone on the Patriots football staff, including head coach Bill Belichick, was linked to any sort of spying on the Bengals sideline. That might sound like good news for the Patriots, but they reportedly haven’t escaped all punishment.

As reported by ESPN’s Adam Schefter, the NFL is still set to fine the Patriots likely within “the next two weeks” for gameday video violations from that Bengals-Browns game.

Patriots are expected to be disciplined for acknowledged gameday video violations in Cincinnati, per league sources. Discipline likely to come in the next two weeks, but not all security reports back to NFL yet.

This might sound unfair to the Patriots, who didn’t have anyone on the football staff connected to the act or were even “spying” in the first place, but it makes more sense after looking at it in closer detail.

The Patriots took full responsibility and claimed that a member of their production staff (and not football staff) recorded the Bengals sideline for a future web segment and failed to tell Bengals staff or the NFL. The NFL accepted that and looking at the recording posted by Fox’s Jay Glazer, it certainly looked rather harmless and no secrets were being divulged.

That however doesn’t mean the Patriots didn’t do anything wrong. While the NFL believes the Patriots are telling the truth and everything was just a big misunderstanding, the act of recording the Bengals sideline for any reason without prior clearance is going to be a heavy fine. It won’t be as big of a fine as the “Spygate” penalties but according to Schefter, it may be a sizable penalty.

A basis for Pats’ discipline.

Unlike Spygate, I can’t see the Patriots fighting this punishment. A loss of a draft pick might be a little much but a fine in the $250k range should be enough for the NFL to look like they laid down a suitable punishment and the Patriots feel like they aren’t being overly punished for a mistake.

It is interesting that out of all this, the Browns seem to have escaped this saga unscathed. They were the ones who credentialed the individual recording the Bengals and it doesn’t appear they will be penalized. While it won’t absolve the Patriots, surely being an accessory to the act should result in something but apparently that’s not the case.