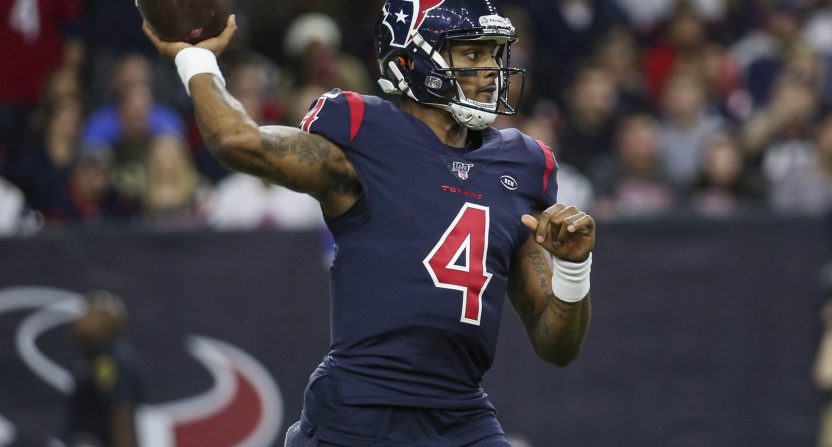 It was not a good night for the New England Patriots.

The defending Super Bowl champions looked completely depleted against the Houston Texans as they dominated in just about every facet of the game. In the end, the Texans won 28-22 but it was a game where the score didn’t tell the complete story.

The Patriots got out to an early 3-0 lead but that was short lived. Once Bradley Roby picked off Brady toward the end of the first quarter, things kinda unraveled for the Patriots.

Deshaun Watson connected with his running back Duke Johnson for their first touchdown. Then after a Pats punt, Watson marched down the field on an 88-yard drive ending with an effective play action pass to Darren Fells for the score.

The Patriots were struggling but they were only down 14-3 at halftime. And considering they were getting the ball the second half, there was plenty of time for a patented Tom Brady comeback.

We were teased that comeback but it didn’t immediately happen. The Patriots failed the convert on 4th and inches and on the ensuing drive, Watson threw it deep to Kenny Stills for the touchdown.

.@DeshaunWatson is getting it done.

A 35-yard dart to @KSTILLS to extend the @HoustonTexans' lead! #WeAreTexans

After the Patriots scored their first TD (and missing the PAT), the Texans employed a bit of trickery as they pulled off a double handoff option for the touchdown. Watson and DeAndre Hopkins switched places as Hopkins threw the ball to Watson for the score.

The Patriots tried to come back but it was too little, too late. James White stepped up and scored his second receiving touchdown of the night but a failed two-point conversion kept them down by 13. Another touchdown made it a six-point game but a failed onside kick sealed the Pats’ fate.

This became a huge win not only for the Texans but for the coaching staff. Defensive coordinator Romeo Crennel and head coach Bill O’Brien were both assistants under Bill Belichick and anytime you can get a win over your mentor and arguably the greatest NFL coach in history, that’s a major feather in your cap. The Texans also remain ahead of the Titans for the AFC South lead.

I’ve learned never to doubt the Patriots. Just when you think they’re out, they’re going to come back better than ever. They want fans and the media to doubt them, they want that “no one believes in us” belief. It may be tougher for the Patriots than it may have been a month ago but don’t be surprised if they are at their familiar spot on the podium and lifting the Vince Lombardi Trophy.