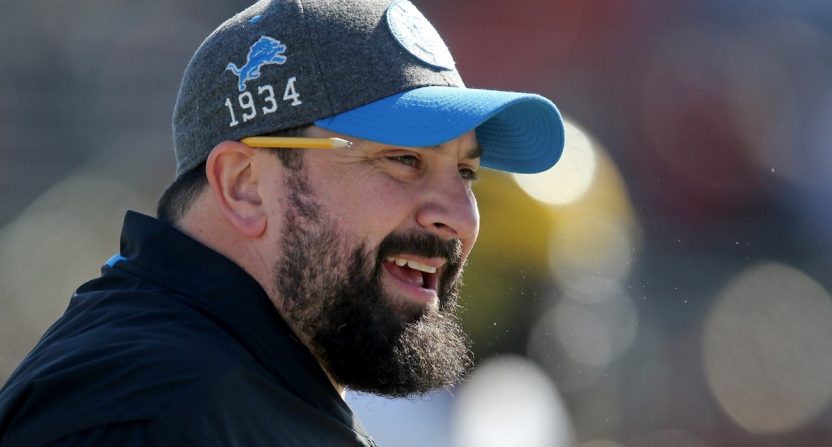 It’s somewhat surprising that the Lions didn’t fire Patricia the Friday following Thanksgiving. The team had done that before, dismissing Steve Mariucci during the 2005 season. The situations for the two coaches actually share some similarities. Both were fired with 4-7 records, both had two years remaining on their contracts. And, of course, both were significant disappointments for the Lions.

But waiting two days through the Thanksgiving holiday probably doesn’t make much difference, other than perhaps dumping the news on a college football Saturday (with local fans preoccupied with Michigan playing Penn State and Michigan State matched up with Northwestern). Now, the following work week can begin with Lions ownership getting started on finding a new general manager and head coach.

Detroit’s head coach was Jim Caldwell for Quinn’s first two years in the front office, notching an 18-14 record. But 9-7 records were deemed not good enough and with Quinn coming from the Patriots, where he worked for 16 years, the belief was that Quinn wanted to hire a coach from Bill Belichick’s organization.

Another coach with Patriots ties, then-Texans defensive coordinator Mike Vrabel, was reportedly a finalist for the Lions job along with Patricia. Whether or not Vrabel would’ve taken the Lions job instead of going to the Tennessee Titans isn’t known, but it was apparent all along that Quinn was locked in on Patricia (who also drew interest from the New York Giants). But Vrabel’s success with the Titans certainly makes Patricia’s failings look even worse.

Patricia’s specialty was presumably defense, having coached on Belichick’s staff in New England for 14 years, six of those seasons as defensive coordinator. Yet the Lions have been terrible on that side of the ball during the past two seasons.

Patricia arguably should’ve been fired after going 3-12-1 in 2019, but Lions ownership decided to give him one more shot. Yet the expectation was for Detroit to be a playoff contender, to be playing meaningful games in December. With Thursday’s loss, that was no longer a possibility. The Lions are last in the NFC North and 12th in the conference, putting them out of the playoff picture.

Detroit couldn’t justify bringing back Quinn either after firing Caldwell, hiring Patricia, and assembling a roster that had difficulty competing on the field. The general manager never built a suitable offensive line to protect quarterback Matthew Stafford, nor defensive lines and linebacking corps that could consistently stop opposing offenses.

Trading away popular and productive players like Darius Slay and Quandre Diggs because they didn’t fit into Patricia’s culture was curious as well.

Lions owner Sheila Ford Hamp on firing Bob Quinn and Matt Patricia: "Things were not going well. It was not what we wanted." pic.twitter.com/lCRtHIXfOb

What’s next for the Lions? A cynical, defeated fanbase that’s endured decades of losing will say that nothing will change until the Ford family sells the team. But that’s not going to happen.

As difficult as it will be, fans will have to hope that Sheila Ford Hamp — who was given control of the team before the season by mother Martha Firestone Ford — can do what her parents (and brother Bill Ford Jr.) never could: Hire a football executive who can build a championship contender and find the right coach to lead the team.

General manager candidates aren’t typically as well-known as coaching prospects, but John Dorsey and Thomas Dimitroff are two former NFL GMs now available. As Detroit Free Press beat reporter Dave Birkett mentions, the Lions wanted to interview Cowboys VP of player personnel Will McClay before hiring Quinn but were denied permission. TV analysts Louis Riddick and Daniel Jeremiah could also be possibilities, though the Lions might be hesitant to hire a broadcaster after the Matt Millen debacle.

As I stated on @lockedonlions earlier this week, the #Lions need to HLN… Hire Louis Now. Louis Riddick is ready. Add Eric Schaffer as EVP of Football and Robert Saleh as HC.

Popular coaches among Lions diehards are Kansas City Chiefs offensive coordinator Eric Bieniemy, who could perhaps salvage the final two years Stafford is under contract. San Francisco 49ers defensive coordinator Robert Saleh — who was born in Dearborn, Michigan, attended Northern Michigan, and coached at both Michigan State and Central Michigan — is also intriguing because of his local ties. Hotshot offensive minds like Carolina’s Joe Brady and Dallas’s Kellen Moore (who played quarterback for Detroit) will probably also be mentioned.

One more name that might come up: Michigan coach Jim Harbaugh, whose time in Ann Arbor appears to be done. But unless he wants to keep his family in the metro Detroit area, would he want to take a job so close to the one he left? (Maybe, since Stanford and San Francisco aren’t far apart.)

The Lions will have some competition in looking to fill their GM and head coach openings. Both the Houston Texans and Atlanta Falcons are also in the market for both positions after making changes earlier this season.