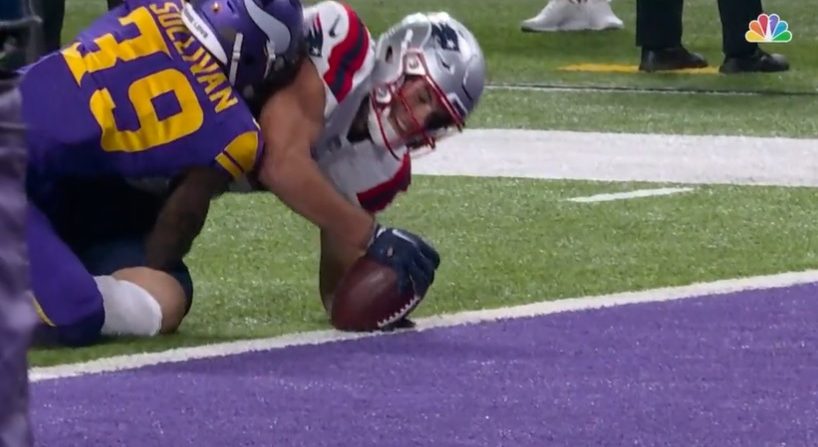 Catch or no catch? It’s one of the most consistently confounding questions asked during NFL games. And nobody is more synonymous with those controversies than longtime NFL receiver, Dez Bryant. One such controversy arose during Thanksgiving’s game between the New England Patriots and Minnesota Vikings. Bryant did not stay silent on the matter.

Upon further review, the touchdown was taken away from Henry and the Patriots. It was ruled that he did not have established possession before going to the ground and that the ball did hit the ground.

Did the refs get this right or should it have remained a TD for Hunter Henry and the Pats? pic.twitter.com/rGGP8Srrrm

Bryant has no doubt had his fill of these conversations, given what happened to him and the Dallas Cowboys in a playoff game against the Green Bay Packers following the 2014 season.

When the play was being reviewed, Dez made it clear that he thought it was a catch. So, he was not happy when the pass was ruled incomplete.

I’m turning this game off SMFH

But this wasn’t just a Dez Bryant issue. Several in the NFL world voiced their frustration that the touchdown was overturned.

That was a catch by Hunter Henry 🤷🏿‍♂️

How in the world is this an incomplete pass?

Hunter Henry was down with the ball across the plane before the ball ever “hit the ground” and rolled ever so slightly. Robbery of a call pic.twitter.com/Dc1BDebvAx

Taking that Hunter Henry TD catch away from the New England Patriots is part of the reason the NFL is an unwatchable product these days. Nobody knows what a catch is or isn't anymore. Total bullcrap that is called incomplete with his hand under the ball

That looked like a catch to 90% of the viewing audience, so naturally it’s incomplete

The NFL has consistently tried to clarify this rule but to no avail. Over the years, it has routinely confounded players, coaches and fans alike. Clearly, that’s still the case.