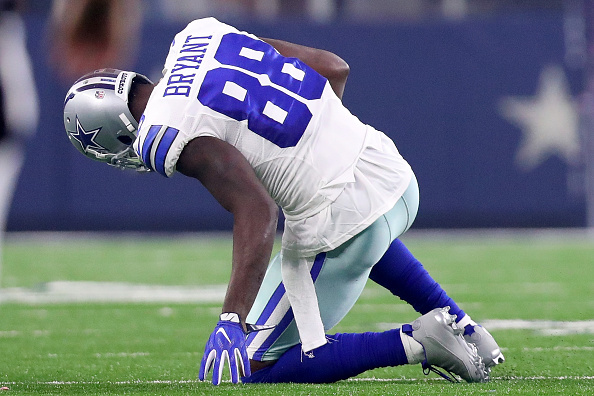 It seems routine at this point. Every couple of months a new story breaks of Dez Bryant getting into trouble or arguments with his coaches, teammates, or just the Dallas Cowboys organization as a whole.

On Tuesday, Bryant got into trouble with the Cowboys once again. This time, Bryant was fined for missing an MRI and team meetings.

HE MISSED AN MRI. How does one do that?

“The players were off Monday, even though injured players are required to report for treatment. When the players reported to meetings at The Star on Tuesday morning, sources said Bryant wasn’t among them. Bryant eventually showed up at the facility late in the day, sources said, but too late for a scheduled MRI.” – Dallas Morning News

Bryant was diagnosed on Wednesday with a hairline fracture in his right knee. Looking back, it makes sense Bryant would be diagnosed with the injury now instead of on Monday because he missed the MRI.

The injury originally occurred during the Cowboys 31-17 win over the Chicago Bears on Sunday. Dallas hasn’t announced if Bryant will miss this Sunday’s game against San Francisco and only that his status is “uncertain.”

“He did not practice today, and we’re hopeful that he’ll be able to play,” Garrett said on a conference call with 49ers reporters, via CSN Bay Area. “We’re taking the situation day-by-day. Hopefully, he can do something tomorrow.

“He has a slight hairline fracture in one of the bones in his knees. We don’t think it’s something that’s going to keep him out for an extended period of time, but it’s going to be a day-by-day, week-by-week situation.”

While the amount of Bryant’s fine hasn’t been disclosed, it’s deserving nonetheless. The Cowboys are 2-1 in a tight NFC East and Bryant is one of the best players on the team. To miss an MRI is inexcusable and doesn’t look good at all going forward for Bryant.