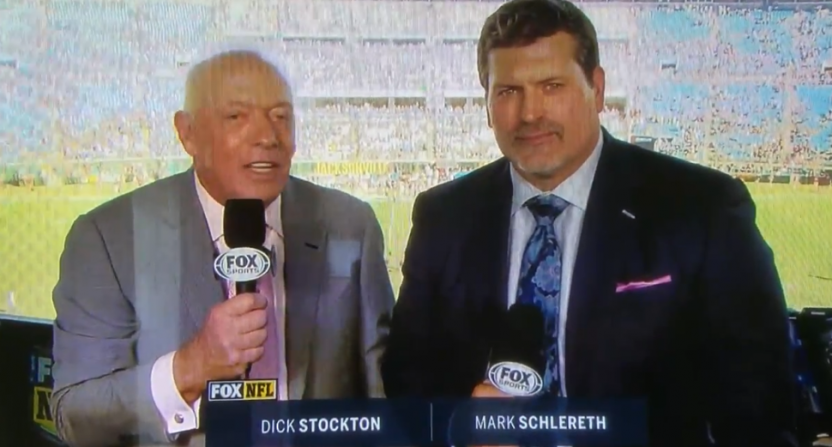 It’s hard to believe that the NFL on Fox is in its 25th season, beginning way back in 1994. One of the figures who’s been there that whole time is Dick Stockton, who joined Fox that year after 17 years with CBS, and has been calling games ever since. Stockton has done a lot of other things over the years, including calling Major League Baseball on Fox from 1997 through 2013 and calling MLB and NBA games for Turner Sports; he’s also been recognized by the Naismith Basketball Hall of Fame and the American Sportscasters Association, and he received the Sonny Hirsch Excellence in Sports Broadcasting Award in 2016.  But in a recent conversation with Awful Announcing, Stockton said his work on the NFL on Fox has been his favorite.

“I was there at the very beginning and I’m there now, and I’ve been with this phenomenal enterprise for the best 25 years of my professional career. To be one of the original on-air people is something that I think is really tremendous. I take really great pride in it, not pride for me personally, but just pride that I’ve been with this fabulous NFL team for as long as I have.”

“…I’ll always have a great regard for my time at CBS doing NFL, but I honestly think that what Fox tried to do and what they’ve succeeded with is that they bring you the game. …I think that the people who put on these games, the broadcasters, the production staff, the technicians, are a step up in knowing what NFL football is all about and what’s important in a given game. And I think that is so critical, ‘What’s important at this stage of the game? What should we be talking about, what should be showing?’ And Fox to me has been ahead of the pack in that respect as far as the Sunday football.”

The NFL on Fox broadcasts have evolved over time, but Stockton said those changes have been gradual compared to the change they brought to NFL broadcasting when they started.

“It hasn’t changed that much, but we made the initial change. When David Hill and company decided to put the Fox Box in (the constant score, time and down and distance graphic), that had never been done before at any network. I think visually, soundwise, the sounds of our game, the quarterback calling the signals, the defensive players, I think it’s been superior to any other broadcast. I think they put together great teams, great producers and directors. It’s always been the same; they let you do your job, they don’t second-guess you, they don’t call you, they say “Have fun” and it filters down, it really does.”

At 75, Stockton is regularly asked how long he plans to keep announcing. He said he doesn’t have any plans to leave yet.

“As long as it feels good. Fox has been great to me, they want me back, they tell me they want me back every year, and I feel good. I’ve been asked a lot of times by people, people have said to me ‘How do you know when a broadcaster is starting to slip?’ And there are mistakes that all announcers make and I’m guilty of them as well, and I know that you get criticized by younger people who say ‘What’s this guy still working for?'”

“But there are two gauges that I go by; one, if you’re behind the play and so behind what is going on in the game that you can’t keep up with the play and are not exact with the call, that’s one. And the other is the energy you have in the fourth quarter. If your energy is beginning to wane, if you’re getting weaker, especially in a blowout. Neither one of those things has affected me; I’m not even in the universe of those things at this point.”

Stockton said while football’s been his most enjoyable broadcasting role, it also can be the most challenging. Part of how he approaches it is emphasizing his analysts’ strengths.

“Football is maybe the most difficult, because you have to be precise and exact in the few seconds you have as you call the play. You are working with a partner. I have a philosophy as to what I want to do and I think it’s worked; I have either broken in or worked with every analyst that we have, ranging from Troy Aikman to Charles Davis, Daryl Johnston to Ronde Barber to Chris Spielman, and now my current partner is Mark Schlereth and I’m going into my second year with him. I’ve worked with all of them and I think that I’ve been able to mentor them initially; they all have talent obviously, but to be able to mentor them, I think the style in which I like to do a game has been helpful to them.”

Stockton said his style’s evolved over time, and he’s now focused on a less-is-more approach.

“I reevaluate myself in how I want to go about the job every year. This is my 52nd year, not necessarily doing the play-by-play, I started with CBS as a post-game talent, before The NFL Today came to be, in 1967. I’ve learned that less is more. I’ve watched other games, not our own people, but people on other networks, college and pro, and they talk wall-to-wall. It’s wall-to-wall talk and they don’t stop. And they mention different things, many of which are irrelevant and really not suitable to what we’re seeing. People that rely on stats I always say don’t know the game; if you can do the game without stats, except what appears on the screen, then that’s the best way for it to be done.”

“But less is more; people prepare so much and they have so many nuggets and they empty their bucket, and people aren’t listening to what they’re saying. If I am crisp in my call and let Mark Schlereth come in and do what he wants to do and say what he wants to say in his style, and if we can get into a conversation that’s a brief one, but not a wall to wall thing, that’s the way the game should be done, and that’s what I’ve learned in the last 10 years. I think that I’ve been stronger in the last eight years than even before that.”

He said a key goal for him is to spotlight his analyst.

“Just to keep doing it the way I’m doing it so that my partner can shine. I believe it’s not Dick Stockton’s broadcast; the key, as far as the commentary is concerned, comes from your expert. If he’s good, and if he’s up on what’s going on in the game, as Mark showed last year that he so clearly is, let him go, let him do his thing. I want people to say ‘I enjoy listening to those two broadcasting a game, it’s an easy listen, and boy, Mark Schlereth is coming up with a couple of gems.’ If those two things happen we’ve had a good broadcast.”

There have been a lot of memorable moments for Stockton over the years, but he said the famous double overtime game in 2003 where Steve Smith and the Panthers beat the Rams particularly sticks out for him.

“One game that Daryl and Tony Siragusa and I did was that double overtime game where Steve Smith ran for a touchdown on a pass from Jake Delhomme against the Rams in St. Louis. That was a game that really stands out. There have been a lot of great highlights; my first game ever was Eagles-Giants at Giants Stadium, and then when Michael Strahan broke the sack record against Brett Favre, also at Giants Stadium, so there have been many, many great ones. Matt Millen and I worked for nearly a decade and did the playoff games as the number-two group, and that was rewarding.”

Stockton said he’s excited to be working a 25th season with the NFL on Fox, and he’s enjoying his status as a veteran announcer.

“It’s been a great adventure, and I love it, and they like having me back, and I love being back. I’m really the most senior play-by-play announcer on football, college or pro, in this country right now, and I’m really delighted about that.”