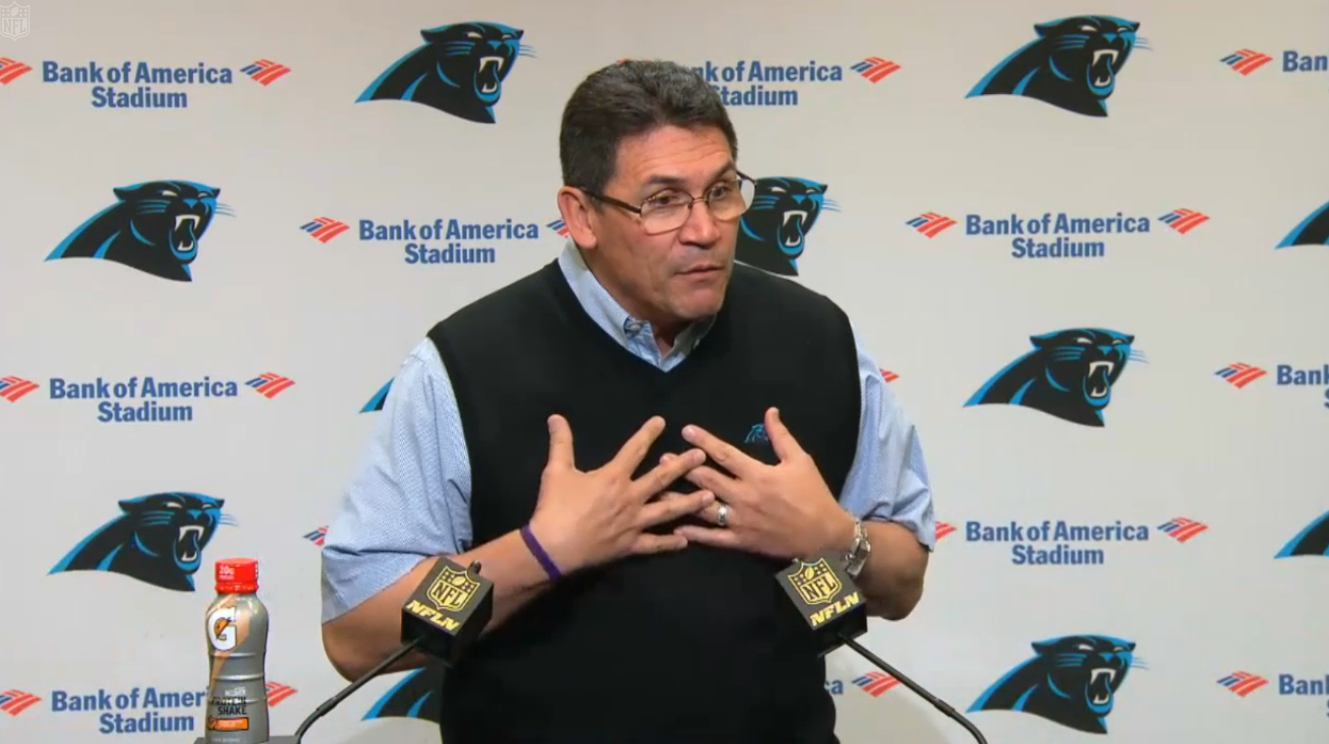 Carolina Panthers QB Cam Newton was hit hard in a helmet-to-helmet collision with New Orleans Saints linebacker Michael Mauti during Carolina’s 41-38 win over New Orleans and had to get checked for a concussion during the game. When asked about how Newton was feeling, head coach Ron Rivera went ballistic on a reporter. Here’s a transcription of his press conference exchange, which you can watch at NFL.com.

Reporter: You have a chance to see Cam today and see how he’s feeling?

Rivera: No. There’s no reason to see how he’s feeling. We all discussed all those yesterday and all that stuff, we were forthright and gave you guys the answers and there’s really no reason to see where he is.

Reporter: When a guy takes two hits to the head Ron… sometimes…

Rivera: Don’t even bring that up Joe. Do not bring that up. We talked about that last night. There’s no reason for this to become a story other than you bringing it up again.

Rivera: Ah, ah, ah, ah, ah [repeat]. Alright, please, we’ve discussed this before. I went through and answered your questions yesterday, I gave you all the information. In fact, I understood you called the league to make sure we’re doing what we’re supposed to. We follow the rules here. Don’t question my integrity when it comes to these things. Understand that.

I try to be as forthright as I can when I answer your questions and when I’m doing that, the least I could do is get the common courtesy that I’m being believed. OK, I take it very seriously. And it is not up to me to make those decisions and these calls. It’s up to the doctors. Just so you understand that.

I’m being very very upfront with this and very forward because it does bother me. I’m not the doctor. I’m not the one who makes these decisions. We have a protocol. We follow the protocol. We’ve had players stay out for, what, three, four weeks and at no point did we force that young man or onto the field because we believed him. So please, do not question me on this.

Rivera gets very angry, but it’s his job, in some way, to defend his staff and the manner in which they handle the protocols in place. If his staff abides by the rules and makes sure every player—not just the star quarterback—is safe, then nobody did anything wrong. However, getting mad at a reporter for doing his job is a bit bush league.

Now, about those protocols. Rivera told reporters that Netwon was going to take a piss when he nonchalantly asked if they wanted to follow him so they could interview him for the concussion protocol. You know, how testing is supposed to go.

If you had any faith the NFL is properly assessing these potentially serious brain injuries, this should take the wind right out of your sail.