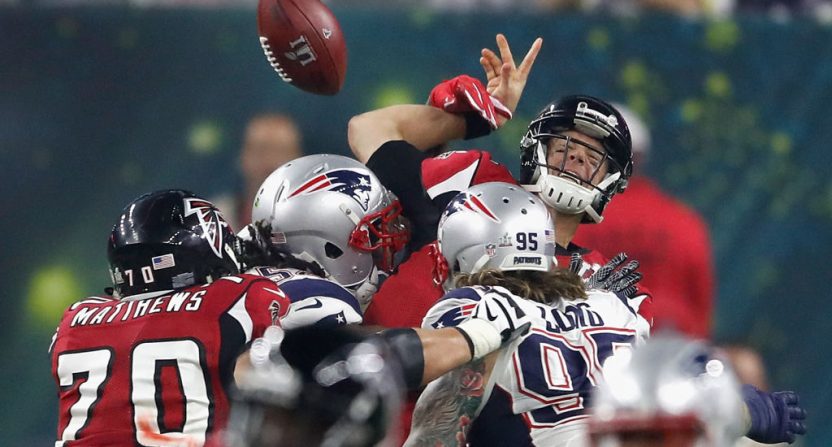 In less than a minute midway through the fourth quarter of Super Bowl LI, seven things went wrong for the Atlanta Falcons. Had any of those things not happened, the Falcons likely would have held on to win their first Vince Lombardi Trophy, instead of suffering the worst collapse in Super Bowl history.

Here’s how the most fateful play for Atlanta broke down.

Bad thing 1: With the Falcons leading by 16 points with 8:57 remaining, running back Tevin Coleman takes a toss from quarterback Matt Ryan on a 2nd-and-2 from the Atlanta 35-yard line. Coleman gains a yard but suffers an ankle injury on the play. 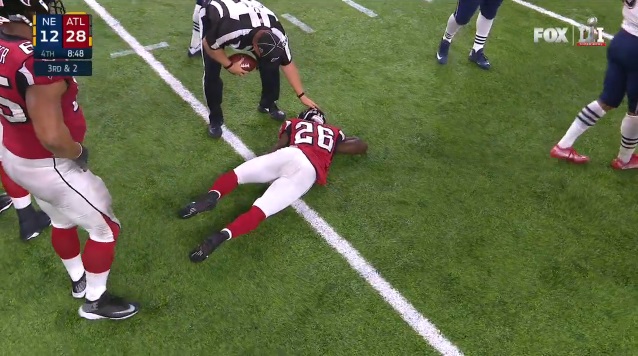 Bad thing 3: Devonta Freeman comes in for the injured Coleman. That’s not a downgrade, but Freeman appears to be confused regarding his assignment. It’s clear in hindsight that he is supposed to block a blitzing Dont’a Hightower, but Freeman hardly touches Hightower, thinks about releasing into the flat, realizes his mistake and sheepishly tries to come back to help his quarterback. Would Coleman have made the same mistake?

Bad thing 4: By also failing to become a receiver, Freeman takes himself out of the play entirely. The Falcons essentially have 10 men against 11.

Bad thing 6: Ryan also fails to hold on to the football.

This play changed the game. With a short field, the Patriots scored in just over two minutes after the fumble. The Falcons were a mess on their next offensive possession, setting up another New England scoring drive to tie the game before the Pats won it on the first possession of overtime.

The Falcons probably wouldn’t have lost had they kept it simple with a 2nd-and-11 at the New England 23-yard line while protecting an eight-point lead in the final five minutes, and they probably wouldn’t have lost had they managed to convert in field-goal range late in the third quarter. Bad play calls, inexcusable sacks and unacceptable penalties cost them in those spots. They also might not have lost had they done a better job at managing the clock in that fourth quarter, or had they not spoiled all three of their timeouts before the offense took the field with just under a minute remaining in a tie game.

But it’s likely none of that would have mattered had they just avoided catastrophe on this one play. And it’s just amazing that it never would have happened had Coleman not gotten hurt, had Shanahan called a safe play, had Freeman known his assignment, had Ryan avoided the sack, had Ryan held on to the ball despite said sack, or had they recovered the fumble (by and large, fumble recoveries come down to dumb luck).

If any of those things go Atlanta’s way, the Falcons very likely win the Super Bowl.