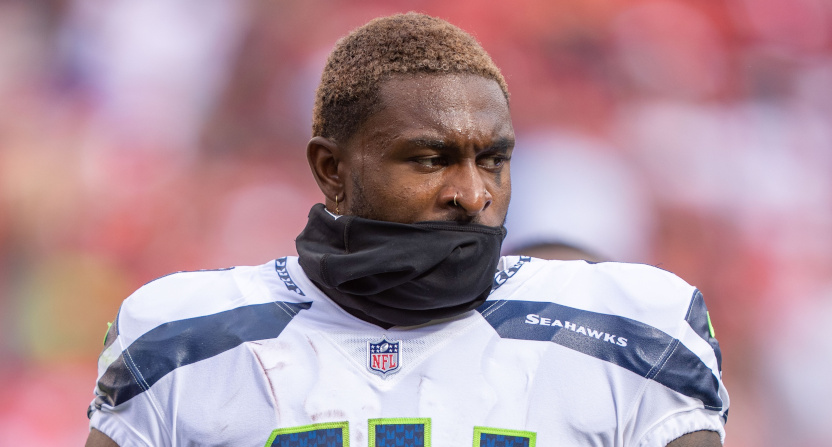 Whenever a player is carted off the field, there’s discussion of how potentially serious an injury to them might be. But a carting off isn’t always indicative of a massive injury. The latest cast in point there comes from Seattle Seahawks‘ receiver DK Metcalf. Metcalf was carted off during the Seahawks’ game Sunday against the Detroit Lions (which they eventually won 48-45). But it was later revealed that wasn’t about anything gravely concerning, but rather a bathroom issue:

Per the FOX broadcast, D.K. Metcalf was actually carted off to the locker room for a bathroom break.

Per @JenHale504, Metcalf was carted off for a bathroom break. https://t.co/o5oZ9KYxFp

As Uproxx’s Robby Kalland noted, this led to a lot of people making references to Paul Pierce. Pierce infamously was taken off in a wheelchair in Game 1 of the 2008 NBA Finals, only to return shortly afterwards. He later suggested that was for a bathroom break, but then insisted he was joking. But there are still many people who bring him up around anything like this:

Paul Pierce is the most influential athlete of our generation https://t.co/OyyIvr8nlV

At the very least, it’s funny that Pierce is still being referenced for this more than a decade after the example around him took place.  And it’s certainly interesting that the “injury” here to Metcalf (seen above in a Sept. 18 game) led to the same sort of discussion. The sports world appears to be very concerned with athletes’ bodily functions and trips to the restrooms, and this is just the latest example of that.