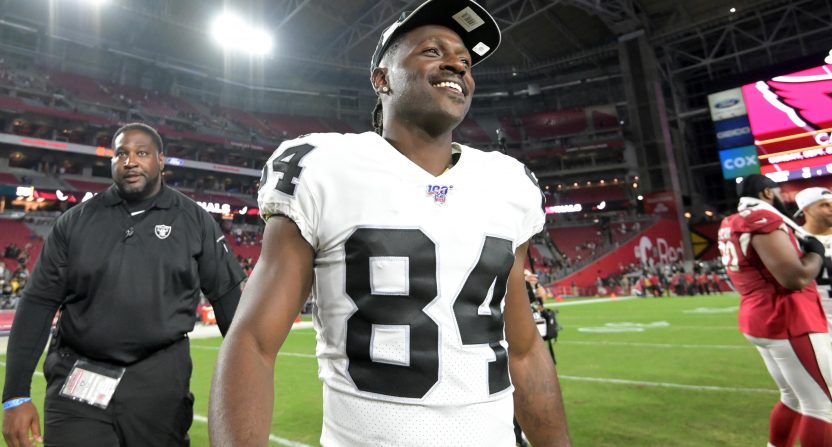 I have no diagnosis from afar on Antonio Brown, whose antics the last couple of months have reached a level rarely, if ever, seen from NFL diva wide receivers. You already know the timeline. Brown waffled back and forth on whether he had any desire to play for the Raiders before finally deciding he didn’t, requesting a release and signing a one-year deal (along with an option for 2020) with the Patriots.

The whole situation is bizarre. It feels like AB has been going at a hundred miles an hour, darting every which way and never making up his mind on what exactly he wants to gain from this. Most observers have decided that he is unstable, in some way. He might be. This also might just be AB being himself — fiercely independent, and willing to act childish and petty to get what he wants.

In Pittsburgh, Mike Tomlin gave him leeway and created a profitable and sustainable relationship for both sides. Eventually, that relationship went stale, and the Steelers appeared to have made the correct decision in cutting bait when they could. The Raiders were too strict to please AB, which was a mistake. Oakland failed to give their prized receiver his freedom, and Brown nuked everything in retaliation. Jon Gruden acted with a certain amount of perspective and reason, judging by Hard Knocks and the taped phone call Brown posted, but Mike Mayock’s fine-happy tendencies drove AB to demand his release.

While the Raiders could have done more to maintain a working relationship with the best wideout in the league, it’s possible that Brown would have pulled these stunts regardless in hopes of gaining contractual freedom. Oakland may never have stood a chance in the long-term.

This sort of power move is rare in the NFL. Le’Veon Bell is the most obvious example, but Bell’s incentives were much clearer: he simply wanted a contract at market value. No one can pinpoint exactly what Brown was going for here. The reasonable assumption is that he wanted a shot at free agency, but slashing your way out of two organizations is a long way to go to reach that objective.

For the NFL and its general managers, the biggest long-term question mark in this situation is whether Brown had any sort of plan here to do whatever he could to get fired (like George Costanza), and thus whether this could become a trend. It’s unlikely that another player will repeat the stunts Brown has pulled, but what if a player like AJ Green tried to force his way out of Cincinnati to go to Kansas City or LA?

The NBA is grappling with the implications of these scenarios now whereas the NFL is set up to avoid these situations. NFL players have less leverage because they get injured more often and generally are more replaceable. Basketball stars drive results in ways that no football player can. Brown is a receiver, a position that requires a player to distribute the ball to them. He inherently has less importance to the team than a first-option basketball star does. The only one who has that kind of leverage is a top quarterback but we haven’t seen a quarterback pull anything like Antonio Brown did.

I’m inclined to say that there won’t be much long-term consequence here for the NFL. Brown forfeited $21 million and tanked his public perception to end up with a one-year prove-it deal. If he weren’t a future Hall of Famer, he would have lost even more money and probably not have had anyone take a chance on him. We will start seeing more player empowerment in the NFL, but not in the form that Brown created, nor in the NBA mold.

AB will play out the season in New England and very possibly win a Super Bowl ring. Perhaps it is winning that motivates him — it does not appear to be money, considering how easily he gave away that $30 million guarantee from the Raiders. Unless Brown is playing the long game and is looking at getting more money in free agency after the season. Winning brings personal greatness, and Brown doesn’t seem like much of a team guy. The whole thing a mystery. We may never find out what happened here.