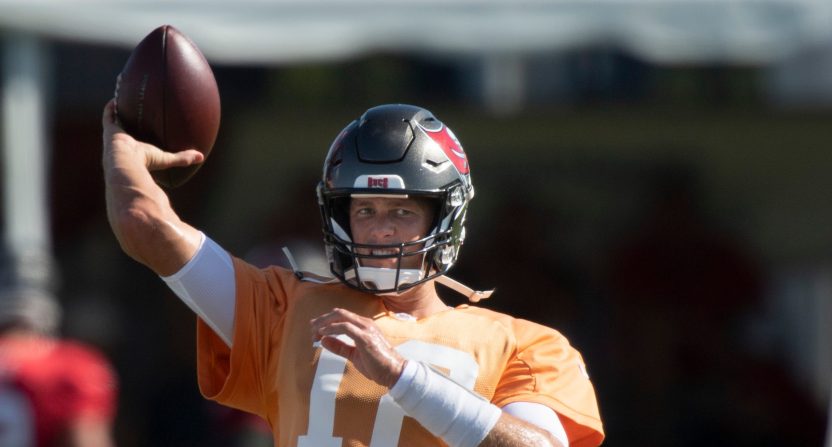 When Tom Brady left the New England Patriots to join the Tampa Buccaneers, there were plenty of people who thought he was washed up and over the hill. One season and a Super Bowl championship later, many of those people are wondering if Brady will ever slow down and stop winning all these NFL titles (seven and counting).

The 44-year-old can still command a game like few, if any, other quarterbacks in the league. And even those who played with him think there must be something mystical about his abilities.

Back in June, Brady told USA Today that the idea of playing until he was 50 seemed a bit much. Given that he had signed a two-year contract with the Bucs, he figured 45 was always the goal. However, he certainly left the door open.

“I’m going to be able to obviously play this year and God forbid anything happens, but play next year and then see what happens after that. If I still want to keep playing, I might be able to do that. And if that’s enough, then that would be enough.”

Brady sat down with longtime teammate Rob Gronkowski in a video posted by the Tampa Bay Buccaneers on Thursday. This time, Brady had a bit of a different answer when it came to whether or not he thinks he could play until he’s 50.

“Wow, that seems to be the really hot question lately…I mean, I don’t find it so difficult. Plus, Florida is kind of a retiree state, so feel like I can play and then just glide into retirement. I think I can. I think it’s a ‘yes,’” Brady said.

The unsaid caveat here is that the Bucs want to keep Brady around for another six years. That could be a tall order, Super Bowl champs or not. Then again, you know what they say about counting out Touchdown Tom… It’s that or Brady is keeping his eye on the Miami Dolphins and Jacksonville Jaguars as a backup plan.