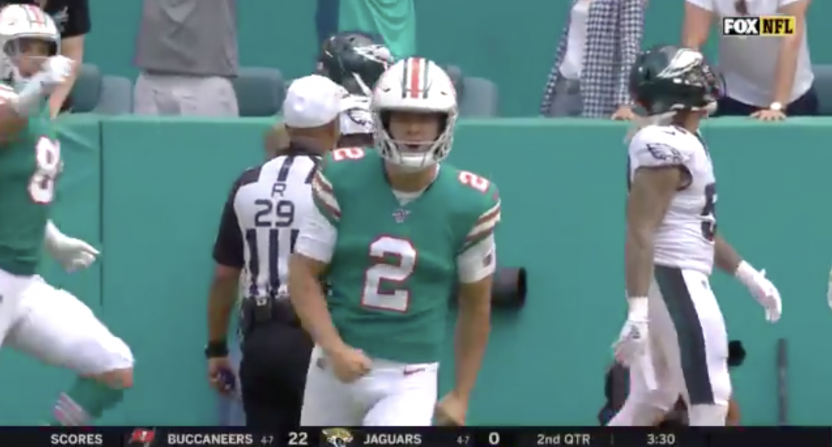 The Miami Dolphins might be one of the worst teams in football but they can sure be entertaining. Having nothing to lose, the restrictions on what you should or shouldn’t do kind of go out the window when you’re 2-9.

Head coach Brian Flores has a creative mind and when you got an opportunity to pull out a trick play, you do it. And this kind of ingenious idea to score a touchdown is deserving of praise.

The Dolphins went for it on 4th and goal but instead of using the offense and calling a QB sneak, they let their special teams go for it. With five players to the left, four to the right, and just one person down at center, punter Matt Haack took the snap. There was an option to take a drop kick for the field goal but instead, Haack rolled left, lured multiple Eagles players, and shoveled the ball to kicker Jason Sanders for the go-ahead touchdown.

The punter just threw a touchdown pass to the kicker 😱 @MiamiDolphins pic.twitter.com/4byw9qFKW4

In hindsight, I’m not sure why the Eagles just didn’t call a timeout. Granted, the Dolphins could’ve done the same thing but at least the Eagles would’ve been better prepared by maybe sending out their defense instead of special teams. Nevertheless, the Dolphins got to pull out a successful trick play and maybe make up from that other time a Dolphins kicker attempted a pass.