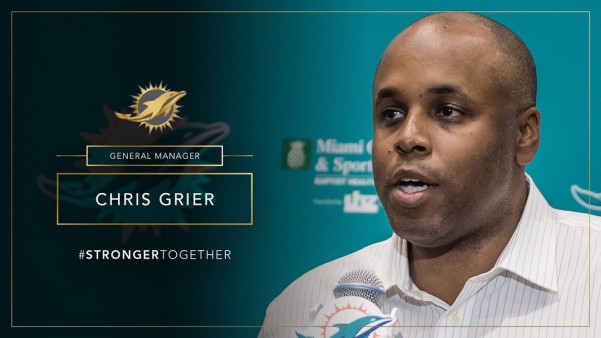 When you haven’t made a playoff appearance in seven years and have had more front office changes than you can count — you might be the Miami Dolphins.

To that end, the organization will turn to an intriguing prospect as their next general manager. On Monday, the team announced Chris Grier as the new GM after a long career inside the player personnel aspect of NFL front offices.

Grier comes highly recommended from one of the most successful coaches and talent evaluators in NFL history — Bill Parcells.

According to a piece from Armando Salguero of the Miami Herald, Parcells sees Grier’s time in the same system he set up as a key to future success as a GM.

“He’s been around personnel his whole life,” Hall of Fame coach Bill Parcells said from his home Sunday afternoon as he watched the regular season’s last games. “He was still a very young man at New England when I was there and his father [Bobby Grier] was there.

“He basically grew up in the system I did. The same people that taught me, the next generation taught him. Chris has a good background, and if the coach tells him what kind of player he needs, he’ll find them.”

Grier will have plenty of challenges in getting this team that went from perennial winners to perennial strugglers back to the top of the mountain.

First things first, Grier will have to hire a head coach that can turn Ryan Tannehill in to a capable top-level quarterback. After vastly improving from 2013 to 2014, Tannehill, at best, treaded water in 2015, passing for 24 touchdowns, 12 interceptions, and 4,208 yards.

To that end, it appears one of the big names on the list is former Denver Broncos and Washington Redskins head coach Mike Shanahan. According to SI.com, the 63-year old former coach is setting up a second interview with the Dolphins.

However, those are just the first set of names, and if a deal doesn’t come quickly, look to coaches involved in the playoffs and college football to also surface. The net is clearly cast wide for the Dolphins’ latest coaching search after failing miserably with their last two hires, Tony Sparano and Joe Philbin. Miami has made one playoff appearance since 2002, and hasn’t won a playoff game since 2000.