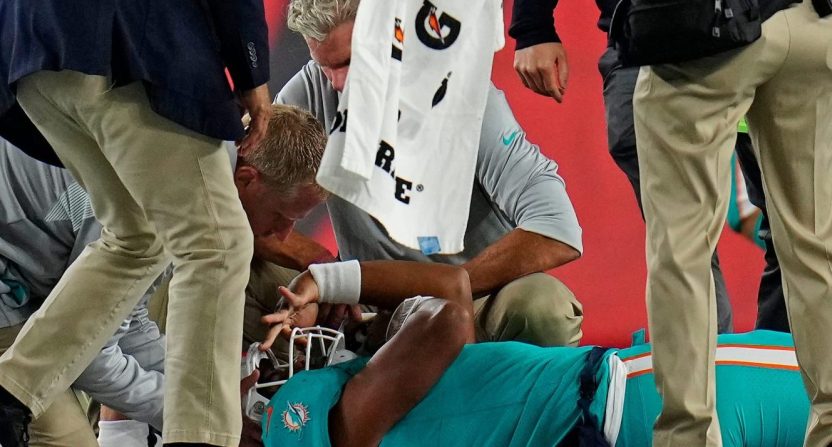 The saga around Miami Dolphins‘ quarterback Tua Tagovailoa continues. Tagovailoa left last Sunday’s game with what appeared to be a head injury, but went back into the game, prompting the NFLPA to launch an investigation. That got much more serious when Tagovailoa again took a hit Thursday and was stretchered off the field (as seen above), leading to lots of discussion of if he should have played, how the team handled the aftermath, and more. On Monday, Dolphins’ coach Mike McDaniel offered a notable update on Tagovailoa’s status going forward:

Breaking: Dolphins head coach Mike McDaniel announced that QB Tua Tagovailoa will be out this week against the New York Jets.

He is still in concussion protocol. pic.twitter.com/mFesLxKIOG

Of course, this seems generally reasonable. It wouldn’t seemingly be logical at all for the Dolphins to run Tagovailoa out there shortly after two highly-prominent hits and this entire debate about concussions. And in some respects, it’s surprising that it took this long for them to state that Tagovailoa was definitely out for this coming week’s game (against the New York Jets at 1 p.m. ET Sunday).

But it’s still notable that the Dolphins spelled out that Tagovailoa won’t be playing this coming week. And when you combine that with their signing of new QB Reid Sinnett, there are certainly questions about when Tagovailoa will come back. But he did get lots of Twitter discussion Monday, including around teammates’ comments:

Emmanuel Ogbah (@EmanOgbah) says – we had a good practice today, Tua is definitely on our minds, we are praying for him. It’s next man up mentality for the Jets. #dolphins #NFL #FinsUp pic.twitter.com/dn3udIui2p

Ogbah: "Everybody still has that (Tua injury) in the back of our minds. It's sad."

“It’s too early to give a definite timeline (on his return)," McDaniel said.https://t.co/5uXUALC0KJ

.@MiamiDolphins coach says @Tua will NOT play in the next game against the Jets on Sunday… "Anything beyond that… we're just focused on making sure he's at optimal health and then crossing that bridge. So it's a little early for definitive timelines beyond that."

Sheldon Rankins says Teddy Bridgewater is an "ultimate competitor." Says Teddy can run any offense and it won't be any drop with Tua out. Rankins played with Teddy in New Orleans and at Louisville. #jets

As noted there, Teddy Bridgewater is set to be the next man up for the Dolphins. We’ll see how he does.

[ESPN on Twitter; photo from The Cincinnati Enquirer, via USA Today Sports]