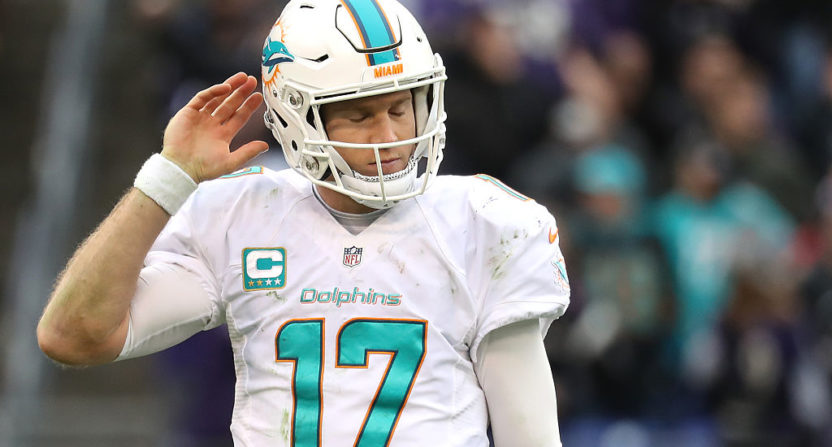 Non-contact knee injuries are always scary, so it’s no surprise the Dolphins took the situation seriously when quarterback Ryan Tannehill took a tumble during practice and hurt his left knee. While the team is still waiting on an MRI, ESPN’s Adam Schefter has reported that the Dolphins are “concerned” about Tannehill’s health.

The injury occurred during an 11-on-11 session when Tannehill scrambled to the right and fell awkwardly as he went out of bounds. He reportedly walked off the field under his own power, but with a limp, as two trainers escorted him into the team’s facility.

Last season, Tannehill suffered a sprained ACL and MCL in the same knee, and he’s been wearing a brace during practice. While he didn’t require surgery, the injuries forced him to miss the final three games of the season. Prior to getting hurt, Tannehill was having arguably the best year of his career with highs in completion percentage (67.1%), passer rating (93.5), and yards per attempt (7.70).

If Tannehill winds up missing any portion of the 2017 season, the Dolphins will go to Matt Moore, who replaced Tannehill at the end of last season as well. Or maybe we’ll see Colin Kaepernick finally land a job. Or maybe Jay Cutler would make a return.

Tannehill’s career in Miami has been underwhelming, and the Dolphins have the option to let him go after the 2017 season. Hopefully he remains healthy enough to play for his job.