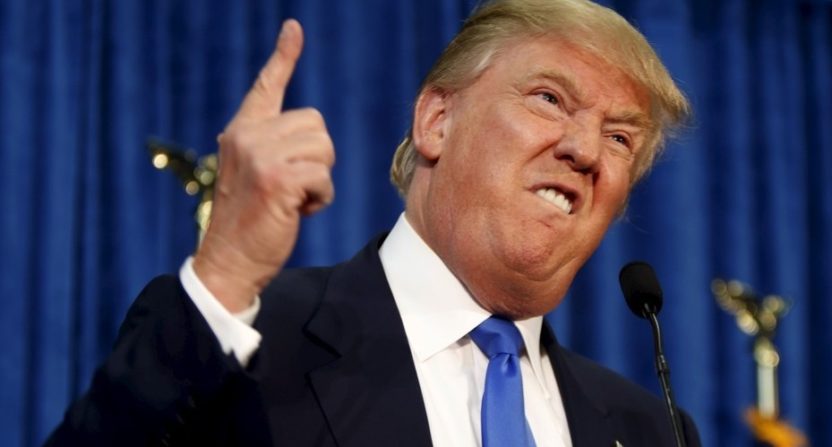 Donald Trump picked a fight with black athletes and the leagues that employ them. Before an audience of his white supporters, Trump implored NFL owners, some of them his friends and campaign donors, to fire the predominately black “sons of bitches” protesting during the national anthem. He attacked Golden State Warriors star Steph Curry, prompting responses from LeBron James and others. Less than two weeks ago, Trump fired back at ESPN over Jemele Hill’s comments, with the White House press secretary suggesting she should be fired.

This is a culture war which Trump’s many critics in the sports media are more than happy to wage with him, one they must wage with him. But, as with all Trump media spats, it will be a war fought on his ground and toward his ends.

We get two media caricatures of Trump. He’s either playing checkers on impulse without understanding the rules or playing some form of multi-dimensional chess and outfoxing the political establishment. Both contain some truth. Trump is terrible at the nuts and bolts of government and has little interest in learning. At the same time, he’s masterful at trolling and manipulating the media. Trump always gets attention. It’s on the topic and framework of his choosing. Even Trump polemicists can’t help but repeat and entrench his messaging and diction.

Trump’s major political innovation was harnessing white racism, stoking fear of various dark others without any scruples. With his foray into sports, he’s again drawing from that white nationalist well to rile up his base. Nothing unites the right (and those recently terming him “Amnesty Don”) quite like the chance to troll “social justice warriors” and “the mainstream media.”

It’s worth asking what Trump is deflecting from. Could it be the advancing Russian collusion investigation? Maybe it’s the utter absence of legislative achievement? Poor response to American citizens in dire straits in Puerto Rico? Having no discernible military or diplomatic plan to address a mushrooming crisis in North Korea? To be fair, how can one expect folks to focus on the concrete threat of horrific nuclear war when Roger Goodell has tribulations?

Of course, this is Donald Trump. His motivations could be as petty as not liking the tenor of the past week’s cable news chyrons or still smarting with the NFL over his hostile merger/lawsuit fiasco that ended the USFL in the mid-1980s. He could also have just glommed onto Fox News talking points and realized it was popular. It could be any, some, or all of the above.

Regardless of the motivation, the racial controversy is here and the sports community, leagues and the media, can’t help be drawn into it. His commentary has become so odious that “sticking to sports” is itself a political statement. Even Trump’s apolitical golfing buddy Tom Brady could not avoid the fray.

We are entering October, the sports calendar’s peak. Both football seasons are in full swing. The MLB playoffs happen. The NBA and NHL seasons start. Trump will be everywhere. Any media air left after the fulminating columns will be hoovered up by the latest tweets and comments from athletes. It will be tit for tat with Trump. What was a powerful protest movement and a debate about the equal treatment of all citizens by law enforcement will get bogged down on symbols, abstractions, and trivia about the flag, the veterans, and anthem propriety.

Trump provokes. Hatred can’t go unchallenged. The media and others take the bait and become the movement Trump wants to oppose, becoming hung up on the NFL or Hamilton. Finite attention drifts from weightier, more damaging matters. It’s cheap and blatant filibustering. It’s how he became President.