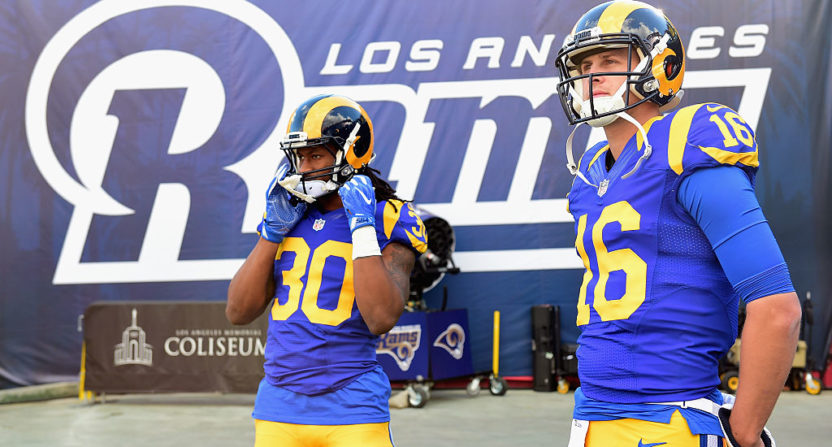 Normally, expectations are pretty low for an NFL team entering the season with a first-time head coach. Throw in the fact that the head coach is just 31 years old and expectations may actually be even lower.

This is the situation the Los Angeles Rams currently find themselves in. The team is entering its second season since moving back to the City of Angels last year and this time they have a new guy leading the way in head coach Sean McVay.

Unlike some of his peers who still spend their Fridays after work at the local Dave & Buster’s, McVay will be spending his 32nd year on earth as an NFL head coach. Overachieving is an understatement for what the Rams’ new coach is doing in his life right now.

But just because this is McVay’s first year with Los Angeles does not mean that another losing season for the Rams is in the team’s future for 2017. This next part may need to be read a few times by some, but the Los Angeles Rams could actually make the playoffs this year.

A postseason game is not something that the Rams franchise has experienced in a long time. The last time this team appeared in the playoffs was back in the 2006 season when Marshall Faulk was still catching passes for them out of the backfield.

Since then, Los Angeles has gone through four different head coaches and finished at the bottom of their division six times.

So why should 2017 be any different? Why should anyone believe that a team which only one four games last season could wind up in the playoffs this year?

Well, there are a few reasons.

Number one being the team’s youth. Not only do the Rams have a head coach who basically just started to shave, but they also have a group of talented young players on their roster this year.

Quarterback Jared Goff and running back Todd Gurley are still only 22 years old, and star defensive tackle Aaron Donald just turned 26 in May. Los Angeles has a roster full of players aged 26 or younger and all of them will be looking to make a name for themselves this season.

Goff and Gurley are each coming off forgettable 2016 seasons. But McVay, who turned Kirk Cousins into a serviceable NFL quarterback during his three years as the Washington Redskins’ offensive coordinator, is capable of getting production out of the Rams’ starting quarterback and running back in 2017.

The new players on their 2017 roster may not be NFL superstars, but each should be able to add a different element to the team that was not present last season.

Even if the offense fails to make significant strides this year, the Rams should still be able to depend on their defense to keep them in games.

Despite the team’s overall struggles last season, Los Angeles’ defense still finished among the league’s 10 best in yards allowed per game in 2016. Of their 12 losses last year, the Rams’ entered the fourth quarter down by seven points or less in six of those games, thanks to their defense.

This season, the Rams’ defense has a chance to be even better since McVay was able to convince Wade Phillips to join the team as their defensive coordinator. Phillips is coming off two years as the defensive coordinator for the Denver Broncos, during which he helped the unit finish among the NFL’s top five in points allowed per game in each season.

One factor that seems to play into a team coming out of nowhere and having a surprisingly successful season is how well they start. Looking at the early part of the Rams’ 2017 schedule, they only play two 2016 playoff teams (the Cowboys and Seahawks) in their first seven games.

A hot start, plus Phillips improving the defense even more, plus McVay casting his millennial magic on the offense, and Los Angeles could be back in the playoffs this year wishing they fired Jeff Fisher much, much earlier.