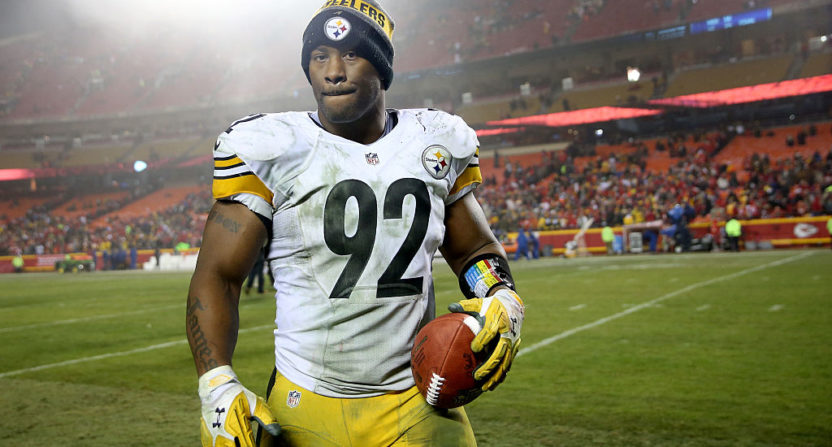 When news broke that the Pittsburgh Steelers released legendary linebacker James Harrison, every person with an ounce of knowledge about football assumed he would go to the New England Patriots. You know, the team that the Steelers would likely need to beat in Foxborough in order to go to the Super Bowl.

Many non-Patriot fans are angered that New England has seemingly improved its defense and gotten a leg up on their biggest AFC rival, but Steelers fans were even more incensed. Many expressed their anger to everyone and some of that was directed at Harrison himself, who had spent 14 years in Pittsburgh and was instrumental in their Super Bowl XLIII victory where he returned an interception 100 yards for a touchdown as the first half ended.

To all Steelers fans, take this from a fellow Steelers fan: Don’t blame James Harrison for what has happened over the past few days. James Harrison came out of retirement for the Steelers and wanted to play and the Steelers didn’t play him. This season, Harrison had only participated in 40 snaps in just five games and was prepared to leave this offseason because he feels he has something left in the tank.

Instead, harbor your hate on the Pittsburgh Steelers for apparently not realizing the bleeding obvious and figured that out of anyone on the 53-man roster, Harrison was the most expendable in order to activate Marcus Gilbert. Take all emotion out of this and the Steelers technically made the best move. Harrison isn’t being played and while he still has something, he’s clearly lost a step or two.

Finally… A teammate that’s older than me!?? @tombrady

But to choose now, coming off of Week 16, to release anyone, much less a team legend, who could help not only a potential playoff rival, but the Super Bowl favorite who you haven’t beaten in the playoffs in the Belichick/Brady era, I’m shocked at the sheer ignorance and lack of awareness for a team who definitely should know better. Release Harrison in the offseason, don’t do it now.

The Steelers are one of the best run NFL teams over the past 50 years but to make this move at this time, is an embarrassing look that at best, will only piss off Steeler fans. At worst, Harrison gives the Patriots even more information in order to beat the Steelers in the playoffs, just like how they beat them in the regular season.

Oh wait, I can imagine an even worse scenario: Steelers vs. Patriots in the AFC Championship game. Steelers are down by four and it’s 1st and Goal with 10 seconds left in the game. Roethlisberger steps back, Harrison reads him like a book and makes the game-clinching interception to defeat the team who cut him after 14 years of service and send the Patriots to yet another Super Bowl.

If that happens, the Steelers will have no one to blame but themselves and I would wish James Harrison good luck in the Super Bowl. Because it’s not James Harrison’s fault the Steelers acted like idiots and directly helped their rival.