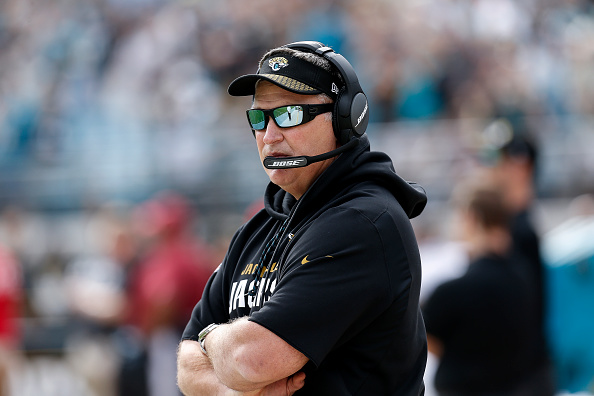 Every football season features its fair share of surprises. But this NFL season, one of the biggest ones is occurring in Jacksonville. Long a joke, the Jaguars are currently 9-4 and sitting in third place in the AFC.

How is this possible?

Detractors will point to the awful AFC South, the conference’s relative weakness outside of New England and Pittsburgh, and the Jaguars’ stable of young talent. However, the answer’s probably a little more straight forward than any of those things.

You’d be excused for not knowing/caring much about Marrone’s football coaching career up to this point, since it’s existed in obscure (to most fans) outposts. That’s sort of what he does — or at least what he’s done since he took over the Syracuse Orange football program in 2009.

At the time, SU was coming off the worst four-year stretch in school history — a 10-37 record where the team looked as hapless as it ever has. Marrone, a Syracuse alum himself, arrived with binders on how to fix things, a love of bologna and Gatorade, and a declaration that it was his “dream job.”

Despite no previous experience as a head college football coach, Marrone had effectively woken a program up from the dead and turned it into a top-40 outfit in just four years. He’d met the challenge quicker than most would have thought, and it was enough to earn him the Buffalo Bills job for 2013.

Two years in Buffalo didn’t yield a playoff berth, but the improvement was clear and immediate there, too. Marrone’s Bills went 6-10 in 2013, then 9-7 in 2014, His staff, largely comprised of his former assistants at Syracuse, quickly turned Buffalo into a sleeper team on the fringe of a playoff berth. There were rumors Marrone was referring to himself as “Saint Doug” for his propensity for turnarounds (leaning mostly on his Orange experience at the time). “Saint Doug” bet on himself that following offseason with the hopes of earning the New York Jets job.

It didn’t work out. And there’s where the story of the skilled turnaround artist appeared to hit a snag.

But of course, Marrone was strategic in his next stop. The veteran caught on with Jacksonville in 2015 — a place where the team appeared poised to leap, but hadn’t quite done so. Then-coach Gus Bradley looked like he was on the chopping block if the Jags failed to succeed. Of course they failed, and by the end of 2016, Marrrone was the interim head coach. He received the full-time job shortly after.

There’s no denying that this year’s Jaguars reap the benefits of some of the work put in by the previous regime. The defense was long a draft focus and the team has been attempting to build something resembling the Seahawks’ success on that side of the ball. It’s worked this season, and those Seattle comparisons will likely continue as a result. Jacksonville has allowed the fewest points per game (15.5) in the NFL. They’re second in total defense, first against the pass and second in interceptions.

But Marrone was part of the offseason acquisitions that brought in A.J. Bouye and Calais Campbell (two of this year’s top defenders) in free agency. He was also part of the process for a lauded 2017 draft class, which included talented offensive players like Leonard Fournette, Cam Robinson and Dede Westbrook.

The former two of that trio have been instrumental in revitalizing the Jaguars’ offense. Fournette has 923 rushing yards and eight scores on the year behind Robinson’s strong push from the tackle position. As a team, Jacksonville is the top rushing unit in the league at nearly 150 yards per game.

However, where Marrone’s really worked his magic has been with quarterback Blake Bortles. The former first-rounder has been able to cut down on interceptions and be a more efficient passer. He won’t come close to his career-high 4,428 passing yards this season, but Marrone installing an effective run game also makes numbers like that unnecessary. With less emphasis on Bortles as the primary playmaker on offense, he’s cut down on turnovers and turned into a smarter football player.

That’s not to say he’s transformed into one of the league’s top QBs. But he is leading one of the top 10 scoring offenses in the NFL right now.

Barring some unforeseen calamity (perhaps like Fournette’s current injury), Jacksonville should find itself in this year’s postseason, hosting a playoff game for the first time since the 1999 season. A closing slate against the lowly Texans and 49ers — plus fellow AFC South contender Tennessee — could net this team 11 or 12 wins. At the very least, they seem poised to match their total wins (11) from the last three years combined.

It’s not entirely on Marrone, clearly. But the coach has managed to turn this supposedly sinking ship around in a hurry. The Jacksonville Jaguars are nearly a playoff team. Doug Marrone is the one who will likely end their 10-year postseason drought, and it only took him a circuitous route from Syracuse to Buffalo to eventually get to Duval County.

Chalk it all up to luck if you must. But there’s a reason he’s called (by someone?) “Saint Doug.”