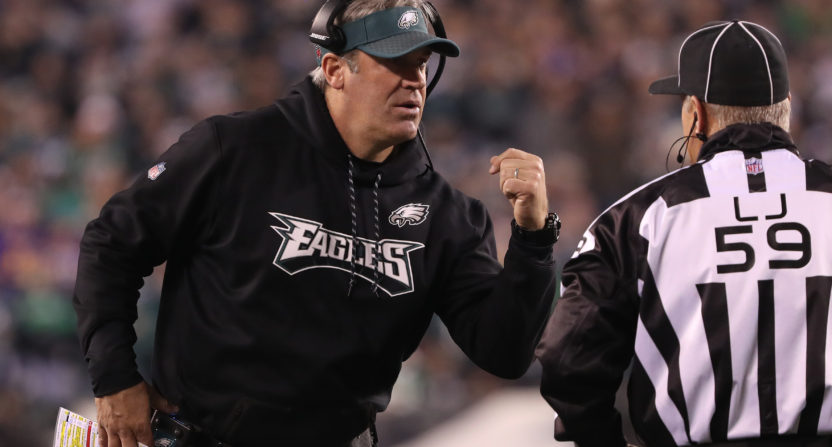 Raise your hand if you thought the Philadelphia Eagles hiring Doug Pederson after the failed Chip Kelly experiment was a bad decision. For those who cannot see beyond your screen, I am raising my hand high in the air.

But with the Eagles now preparing to challenge the New England Patriots in Super Bowl LII, I have made a point to eat as much crow as possible while this season has rolled along. Like many in the Philadelphia area, Pederson has convinced many of his former critics to flip the script. So many opinions on Pederson as head coach have changed this season that now the question is whether or not Pederson has already eclipsed the legacy of his mentor, Andy Reid.

That may be a tad premature just two years into his run as head coach, but there is no question that winning the Super Bowl would help weigh the scale heavily in Pederson’s favor. Without a single Lombardi Trophy to show off (in a division that has a combined 12 Super Bowl championships between the three other teams), the first coach to cause for a Super Bowl parade down Broad Street will go down in Philly sports history as a hero for decades to come.

Pederson, who was once thought of as merely a clone of Andy Reid brought in to go back into a comfort zone that saw diminished results on the field in the late years of the Reid tenure, had many critics right out of the gate. It did not help that Pederson was hired to be the Eagles head coach immediately after an early AFC playoff exit that saw an abysmal offensive series called by Pederson in the final minutes of their home playoff loss.

Fortunately for the Eagles, Pederson has learned on the job and has managed to break the mold of being Reid 2.0. Pederson sees it in himself as he continues to learn from his mistakes and avoids falling into the same traps over and over as Reid often did over the years (and still does to this day).

“I just think I’m wiser, smarter,” Pederson said before the NFC Championship Game, per NBC Philadelphia. “You learn from past experience. I think I’m a better situational manager in the games and preparing the team and my messaging with the team. I just think you learn and grow every single day, every single week. But at the same time as I grow, I want to make sure that the guys are still seeing the same me every single day. I’m still going to be the same person through the highs and the lows.”

It is easy to say Pederson has worked out when his team is about to play in the Super Bowl despite being a home underdog in each of their two playoff games so far. Losing MVP-worthy Carson Wentz toward the end of the season and having to move forward with Nick Foles was thought to be a nail in the coffin for the Super Bowl dream in Philadelphia, but Pederson has managed to keep things chugging along by riding his defense and adapting his game plan and in-game decision making on the fly as needed.

Foles had the game of a lifetime against the Vikings and their top-ranked defense, but Pederson’s approach to the game and his gameplan are to be credited. The previous week against Atlanta, more credit could be given to Pederson for how he coached the game and utilized his timeouts and challenges while also sticking to his gameplan.

Unlike Reid, Pederson has shown he is more willing to gamble at times. There were times where that cost him a season ago, but as Pederson has admitted, he has learned along the way. Pederson is not likely to make the same mistake a few times, but he is also not going to shy away from trying something again if it didn’t work the first time. But back to the point at hand. Has Pederson already moved ahead of Reid in the pecking order of Eagles coaches in franchise history?

Winning the Super Bowl will cement Pederson at the top, especially since it would have been done with a backup quarterback against the greatest dynasty in the NFL over the past 15 years with arguably the greatest coach and quarterback in NFL history. Reid had his crack at the Patriots dynasty in his lone Super Bowl trip with the Eagles in the 2004 season, but ultimately that was the closest he would get in his lengthy career on the sidelines in Philadelphia.

Reid was 1-4 in NFC Championship Games despite being the favorite in four of those games and playing at home in three (1-2 at home). Reid’s legacy in Philadelphia currently stands as the most successful in franchise history in the regular season but includes a long list of disappointments in the Super Bowl era and may be seen as the most underachieving in postseason play. The Eagles should have won at least one championship during the height of Reid’s dominant run, and they came up empty. That ultimately taints Reid’s legacy in Philadelphia.

So far, Pederson is 2-0 in the playoffs and has done that with a backup quarterback in one of the deepest NFC playoff fields seen in a number of years. The future looks bright for the Eagles regardless of what happens in the Super Bowl, because Carson Wentz will eventually be back at quarterback and the experience being gained this season could pay off in the long haul. Pederson is in a prime position to surpass Reid’s legacy in Philadelphia, and he can do it in just his second year on the job.