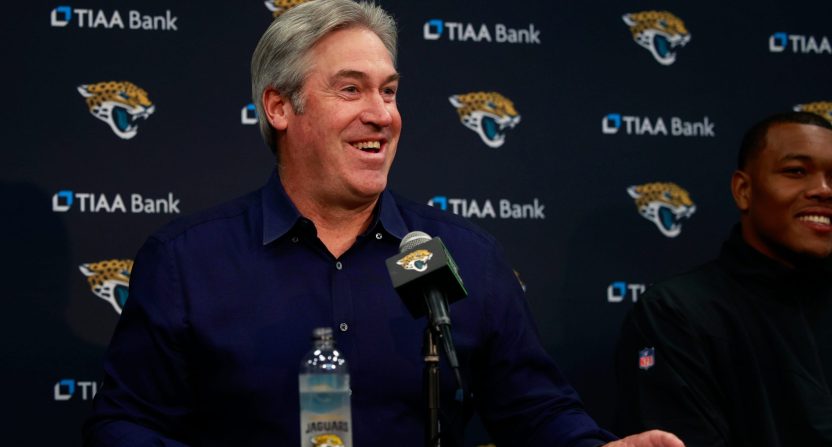 Pederson spoke on the challenges his team will be facing this year during an appearance on The Rich Eisen Show. Eisen asked if he feel that part of his job this season is healing this team following the dramatic Urban Meyer era.

“Yeah, it was different, you know, and it’s a unique situation,” Pederson said “Obviously, it’s unfortunate, and listen, there’s a lot of great people here and a lot of really good people in the front office and in football ops and everywhere. … Nobody wants to ever go through a season like that. I wasn’t here, so it’s hard to really put words to it, but I can only just sort of empathize with them and build off of what we’re doing, build off of a culture that we’re trying to establish here, and really flip the page and breathe.

“I’ve got to gain the trust of the players in the organization. That’s part of who I am now as the head coach and then it’s something that is going to come with time. And that’s something that we’re working on each and every day is just gaining the trust of the players. … So it’s heading in the right direction. The guys are excited. There’s a lot of energy, a lot of young guys here, they’re excited to be on the grass and go through these phase two type practices and looking forward to OTAs. And obviously training camp here coming pretty soon.”

When asked if part of his job this season is to help the team in “healing,” Pederson agreed.

“I agree with that,” Pederson said. “I do. I know this is professional football but listen, it’s also life too and these kids and the people that are here have families outside of this business, in this organization. And I think part of the healing process is the best we can do is to flip the script and to try to gain the trust of these players. I do agree that there is some level of healing that has to take place and it has taken place and is taking place but you know, we’re not where we need to be obviously right now and we’re gonna continue to work.”

In his short time with the Jags, Meyer left a lot of mental and physical scars on this team that most haven’t forgotten. Still, Pederson seems to be adjusting well to his new head coaching position, has the respect of the players, and it doesn’t hurt that he brings a Super Bowl ring with him either.