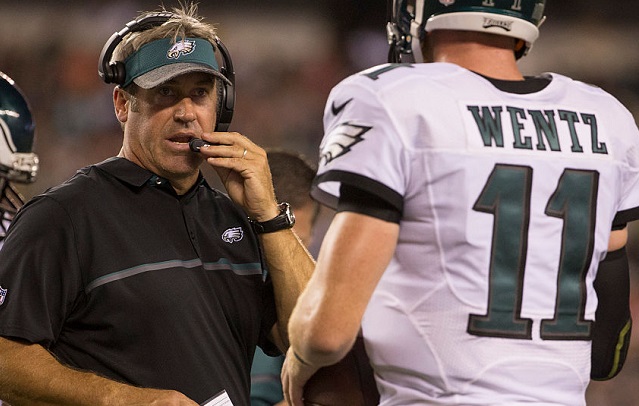 In the past few weeks, Philadelphia Eagles head coach Doug Pederson and New York Jets head coach Todd Bowles have been mentioned as possible coaching casualties in 2016 — in just their respective first and second seasons on the job.

To be sure, neither of their teams will qualify for the postseason, and Bowles’ Jets are bad enough that they may end up with one of the top picks in the 2017 NFL Draft. Ultimately, the 2016 season is not going to be one to celebrate, though it’s being viewed as worse than it is right now, on account of both coaches having early success in their tenure.

Philadelphia was whipped into a frenzy by the Eagles’ 3-0 start this year, punctuated by a lopsided win over the Pittsburgh Steelers in Week 3. Since then, the team is 2-7 and rookie Carson Wentz has been asked to do more and more, despite his supporting cast typically being unable to give him much help. Wentz isn’t blameless in those losses, and neither is Pederson, though it’s clear that the Eagles have a passer with which they can contend and in the NFL, that’s half the battle.

Pederson, a former quarterback himself, was instrumental in getting the most out of the limited tools from Alex Smith in Kansas City. He’s a fine figure to oversee Wentz’s continued development in Philadelphia, provided that he and the front office are able to fill the receiving corps with players who can actually catch. What’s more, a change this early in Wentz’s career might as well function as a repeat of a rookie season. He’ll have to adjust to a new offensive system again in year two. Before you know it, you could be in danger of putting him in a Sam Bradford type of situation with no continuity. Philly is coming off a bad three-game stretch, though their first four losses were all of the one-score variety. There’s some cause for concern, but it’s important to remember this team was at least competitive for most of the season.

Coming into 2016, the Eagles were roundly expected to be in a rebuilding year. Few analysts even had them finishing near 8-8. That impressive start sold the illusion that immediate success had already arrived. Teams figured out how to exploit the roster’s weaknesses, and the Eagles generally had problems winning on the road. Still, the existence of a promising quarterback and a capable defense is plenty to be encouraged about in a season where little was expected and the franchise was still picking up the pieces from the Chip Kelly era.

While the Jets were coming off a 2015 season in which they just barely missed a playoff berth, their quarterback situation was anything but resolved. The team spent all offseason playing hardball in contract talks with Ryan Fitzpatrick before finally coming to terms on a one-year deal during the summer. Fitzpatrick’s play has justified the team’s reluctance to give him a long-term deal, but it still doesn’t mean the Jets have an answer. It took 13 weeks for Bryce Petty to get his shot to close out the season, though it would take quite a performance over the next four weeks to convince the Jets that they have a franchise quarterback on the roster.

New York overachieved in Bowles’ first year, and that 10-win season allowed the franchise to believe it could get one more playoff run out of a bunch of older veterans. Fitzpatrick reverted to the form of most of his journeyman career. Darrelle Revis’ decline hit a steep grade. Eric Decker was lost early in the year. Nick Mangold and Brandon Marshall may be getting too old and expensive for their current output.

Being bad enough to be in the running for a quarterback of the future is more of a long-term win for the franchise than another middling finish that falls just short of the postseason. Even had the Jets managed to get a Wild Card, it was hard to envision this team playing at its peak challenging for a conference title. Ultimately, the Jets went for broke for another 10- or 11-win season. That’s something you can blow up without too much risk. Aspiring to be just pretty good is no way to be in the NFL.

Bottoming out should convince the higher-ups that another stopgap passer isn’t a tenable position because the rest of the roster isn’t strong enough to carry him. Again, Petty would have to really impress to close the conversation about what the Jets have to do in the future. General manager Mike Maccagnan will have to work some Howie Roseman-type magic to handle some of the older veteran contracts the team is dealing with. Still, an abrupt change at coach doesn’t get this team any closer to contending.

NFL history is littered with coaches who could have been something if only they had a quarterback. Hell, Jeff Fisher actually did okay for himself when he had Steve McNair. Bowles has made mistakes this year and the loss to the Colts on Monday night was a pitiful showing, though after how he was able to cobble 10 wins out of a fairly sorry roster in 2015, one setback of a season seems like a hasty move for a franchise that just hit reset the year before.

Pederson and Bowles should be given one more year. That way, if things go bad, Wentz has already weathered what can be a difficult second season. And you know for sure that Pederson wouldn’t be the guy. The Eagles should challenge for a playoff spot in 2017, provided they can get some help at offensive line and receiver. The Jets are a little more difficult to peg, as much depends on who is their quarterback. Overhauling the roster and bringing in a first-rounder doesn’t translate to immediate wins. If the Jets don’t blow it all up, they’ll still have to come close to contending to justify Bowles presence beyond next year.

It does help that the most alluring coaching candidates on the market are likely to be guys like Josh McDaniels and Kyle Shanahan. Teryl Austin might very well make a good head coach, though he’s not someone who moves the needle for casual fans. There’s not a blockbuster coaching hire out there, and that works in Pederson’s and Bowles’ favor. Staying the course is never an easy sell after a losing season. In the case of the Eagles, there’s reason for hope. That’s always a rare commodity with the Jets, though at least Bowles has proved himself capable of fielding a decent team if the pieces are there. That should be enough to buy one more season, at least.