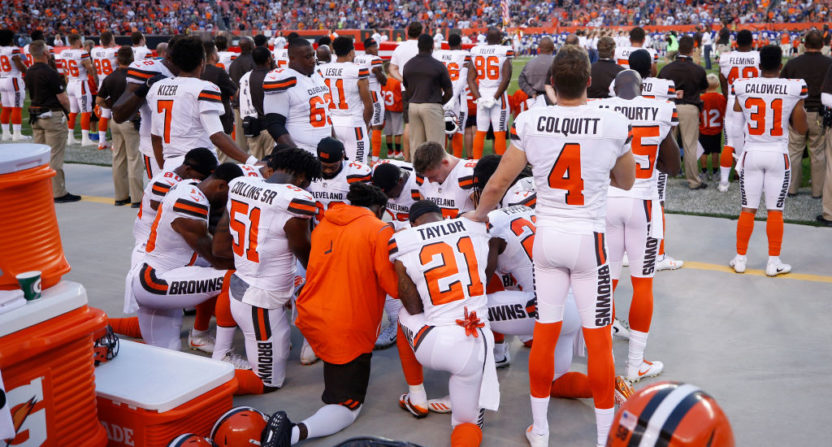 While Colin Kaepernick seemingly can’t find a job, his fellow NFL players are following through on what he started and are continuing to protest the National Anthem before games. On Monday, the largest such protest occurred in Cleveland.

Before their game against the New York Giants, many Browns players decided to take a knee during the Anthem. Among the Cleveland players who took part in the protest by taking a knee were Duke Johnson, Jabrill Peppers, Seth DeValve, Jamie Collins, Christian Kirksey, Jamar Taylor, Terrance Magee, Calvin Pryor, and Ricardo Louis.

On top of those kneeling, DeShone Kizer, Britton Colquitt, Jason McCourty, and Shon Colema stood nearby in support of the same cause.

Woah. A ton of Browns kneeling during the national anthem here pic.twitter.com/Qv6qSPs6kX

Previously, Browns’ Head Coach Hue Jackson had said he hoped his players wouldn’t protest during the preseason, but he understood why some players might not stand for the flag.

After he received criticism for saying he hoped his players wouldn’t protest, Jackson had to amend what he said.

“The intent of my comments was not to discourage individual expression from our players in light of a cause that moves them to personal expression. I’m disheartened that I gave anyone that impression because I did not speak with enough clarity. However, my words did reflect my concern — that I would express to any player — about protesting during the anthem. There are many effective ways athletes can utilize their platform if they so desire, but I would respect any individual decision, as ultimately, it would be the player’s choice after much thoughtful dialogue.

“As an American, I am of the belief that our unique strength is in the diversity of our nation. As an NFL Head Coach, I strive to have this same belief reflected in how I lead and value every player on our football team, as well as every individual within our organization.”

At the end of the day, what the Browns did before their game against the Giants is impressive and meaningful. Naturally, plenty of people were angered by their decision.

Wonder what would happen if protested at work like this? #Fired. Get off the ground and go play ball.

I think that is very disrespectful and un American.

Then again, this is what a lot of people said last year after Kaepernick took a stand and kneeled during the Anthem. While that has arguably hurt his free agent stock this year, he did make headlines and created a nationwide conversation about race in America. With all the events that have unfolded over the last couple months, it would probably be more surprising if these protests stopped occurring.

UPDATE: The Cleveland Browns released a statement late Monday night about their players protesting during the Anthem.