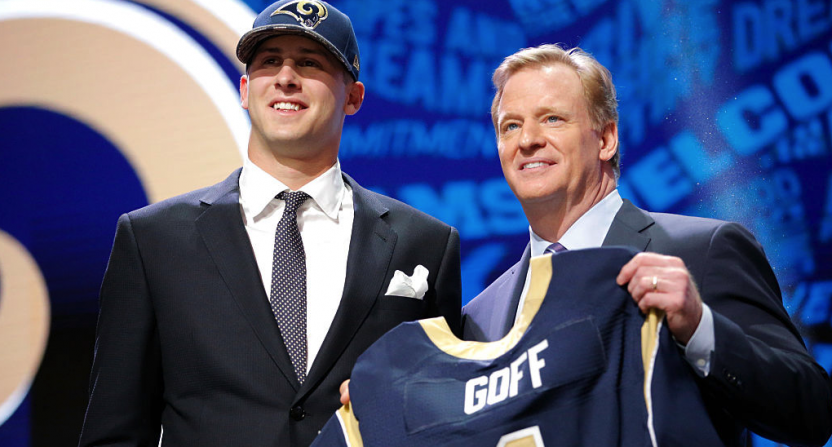 Depending on who you ask, three or four quarterbacks could be selected in the first round of the NFL Draft on Thursday. Deshaun Watson (Clemson) and Mitch Trubisky (North Carolina) are locks in the top half of the round, while at least one of Pat Mahomes (Texas Tech) and DeShone Kizer (Notre Dame) could get picked in the bottom half.

But top half and top five are two different things. Both Watson and Trubisky are ranked outside the top 10 prospects right now, yet are likely to be selected among the top 10, or even top five, picks. Unfortunately, this is par for the course in the draft — especially of late.

A quarterback has been chosen in the first round of every NFL Draft since 1997. And all but one draft since 1989. The event’s always been a guessing game, sure. But the last 10-12 years have made it even more of one, despite the increase in scouting and resources for teams.

Of the 66 quarterbacks picked between 1989 and 2016, 33 of them never started a playoff game. There’s still time for some of those players, of course. But even a good portion of the recent draftees are either out of the league or close to it. The Minnesota Vikings’ Teddy Bridgewater is the only first-round QB (out of nine) drafted after 2013 to even start a playoff game. Carolina Panthers star Cam Newton is the only first-round passer drafted after 2008 to make a Super Bowl. Joe Flacco (2008 draft) and Aaron Rodgers (2005 draft) are the only first-round quarterbacks drafted since 2005 to win one.

The point of drafting a “franchise quarterback” is to win championships, no?

There are caveats to some of this, of course.

For one, we’re comparing these more recent draftees to an era that has been completely dominated by a handful of players at the QB position. Tom Brady was not a first-rounder, but has won five Super Bowls with the New England Patriots. In the stretch including Brady’s first (2002), a first-round QB has won eight of 16 — two each for Peyton Manning (1998), Eli Manning (2004) and Ben Roethlisberger (2004), plus one apiece for Rodgers and Flacco.

Drew Brees was the first pick in the second round back in 2001 — but had he been selected the following year, his 32nd overall pick would’ve been in the first round (the Texans entered the league in ’02). Russell Wilson (2012) was a third-rounder. Brad Johnson, who led the Buccaneers to a title in 2003, was a ninth-round pick in 1992.

Even accounting for the dominance of a select few passers, however, it doesn’t explain why so many young quarterbacks have struggled once they arrive in the NFL lately.

Nineteen quarterbacks were selected in the first round from 2009 to 2016, and they’ve combined for 16 playoff starts. Of those, Newton and Andrew Luck (2012) have six apiece. Tim Tebow (2010) has two for the Broncos.

Are the drafting teams part of the failure here?

The Bills are 0-for-2 (J.P. Losman, E.J. Manuel) since 1989 on first-round quarterbacks. Cincinnati’s 1-for-3 (the win being Carson Palmer), while the Browns have swung and missed on four straight — which is why they’re eyeing a QB once again this season. Denver’s done pretty poorly as well, but has won Super Bows during this stretch with players they didn’t draft (John Elway, Peyton Manning). Jacksonville, Seattle and Washington have been horrendous as well, and the Rams could end up mismanaging Jared Goff into another failure soon.

But with ownership, front office and coaching changes, perhaps the problem is the systems which the kids come from?

Cal — an underrated pro talent producer — is 1-for-2 with an incomplete, and a system that has trended toward questionable with regard to NFL passing capabilities of late. None of Florida State’s three first-round QBs have started a playoff game, and the same goes for Oregon’s three. Meanwhile, Syracuse, Miami-Ohio, Alcorn State and Delaware grads have all run up double-digit start totals.

So maybe it is all just random luck with regard to these picks. And also, perhaps that’s the point. It’s no sure thing to draft any player, but given the investment needed with quarterbacks, it’s arguable that the downside to picking wrong hurts you more than any other position. Cleveland has picked a passer in the first round four different times, and they’re picking here again because all of those options failed. The same could be said for the Jaguars and others as well.

Watson, Trubisky, Mahomes or Kizer could all potentially succeed in the NFL after hearing their names called at this weekend’s draft. But based on the recent results, the odds of them never seeing the field in a playoff game also seems pretty high. Perhaps so high that teams should stop rolling the dice as much on first-round QBs, unless there’s a generational talent at the top of the board.