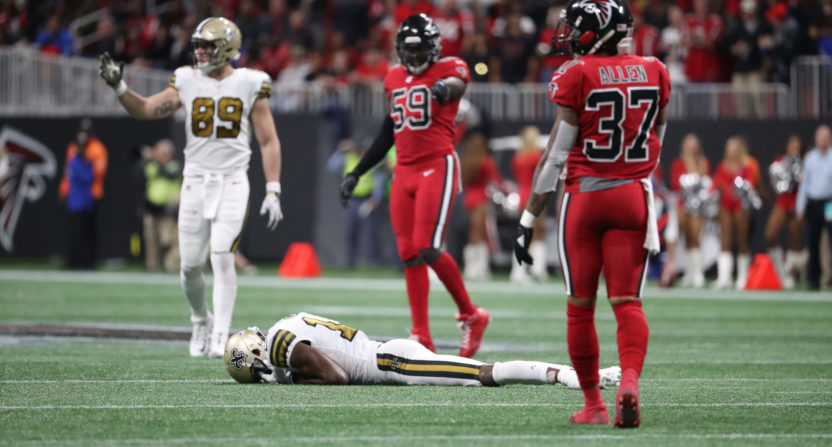 The game saw two Saints players leave with a concussion, defensive end Trey Hendrickson being carted off and two other players — A.J. Klein and Kenny Vaccaro — left the game with groin injuries. And that was just the beginning of the injury concerns for the Saints on Thursday night.

Brees echoed a recurring sentiment from the players’ point of view regarding the concerns of playing Thursday night football on just four days of rest.

“It’s 100 percent a product of playing on Thursday night,” Brees said after the 20-17 loss to Atlanta on Thursday night, according to The Advocate. “You understand what guy’s bodies go through in a game, and then to turn around four days later and play a game? Look at the injury studies. They’re off the charts. Is this smart, as it pertains to guys’ health and safety? No, absolutely not.”

Drew Brees on Saints' injuries: "It’s 100% a product of playing on Thursday night. Do you understand what guys’ bodies go through in a game? And then to have to turn around 4 days later and to play?…Is this smart as it pertains to guys’ health and safety? No, absolutely not."

Brees was not alone in his concern over player safety and Thursday nights. Vaccaro also shared his thoughts about the ongoing situation.

“When you play three days later three days after a tough game against Carolina, it started swelling up on me and got real sore,” Vaccaro said. “It just got to the point where I started feeling my adductor (muscle). I had to make a decision, do I want to stay in there and potentially hurt it again, or do I want get rested up play next week against the Jets?”

Saints coach Sean Payton was also weighing in on the obvious concern as well. In his postgame press conference, a frustrated Payton asked the media “What do you guys think, why do you think there were so many injuries tonight?”

Last week’s game between the Dallas Cowboys and the Washington Redskins was the only Thursday night game on the NFL schedule this season other than the season opener between the Kansas City Chiefs and New England Patriots to involve teams with more than four days of rest. The simple solution for addressing the Thursday night injury concerns would seem to be assuring every team playing on a Thursday night to have a bye week leading into the game so more time is available to recover from the most recent game and allow for added recovery time before the next game on the schedule.

Brees said he intends to help address this ongoing concern with the players’ union as the issue continues to spread around the league and the sentiment from the players continues to grow louder every week.

“I can sit here and tell you that no player likes putting himself at risk on four days’ rest to come and put their bodies through what they put them through in a game,” Brees said, according to ESPN. “So you hope that it’s addressed [this offseason], you hope that it’s talked about, and you hope that something is done about it.”

If the NFL truly cares about the safety of the players, then it must find a way to address the concern moving forward if it insists on making Thursday Night Football a regular part of the schedule.