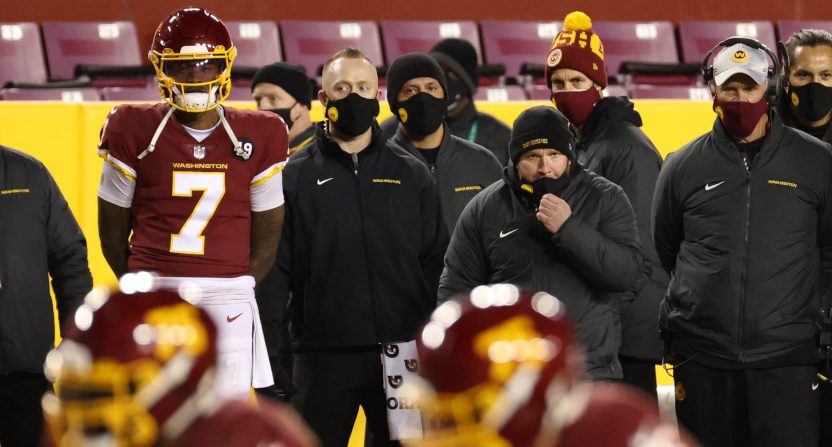 This proved to be quite the week for Washington Football Team quarterback Dwayne Haskins. On Wednesday, the team fined Haskins $40,000 and stripped him of his captaincy after he was photographed not wearing a mask at a large gathering at a hotel for his girlfriend’s birthday party Sunday. Haskins wore a face shield in practice this week and attended meetings remotely, but still wound up starting Sunday against the Carolina Panthers thanks to Alex Smith not being able to go after a calf injury. However, he was benched in the fourth quarter for Taylor Heinicke with Washington trailing 20-6.

Washington would go on to lose 20-13, with Heinicke leading a drive for a late touchdown that wasn’t enough. But the bigger story here may be what’s ahead for Haskins (seen above looking on from the sidelines in the fourth quarter after being benched). He was the 15th overall pick in the 2019 NFL draft, but has been benched this season for Smith, Kyle Allen, and now Heinicke (who Washington only signed Dec. 8 and promoted off the practice roster on Dec. 19).

Taylor Heinicke was taking advanced mathemetics classes online at ODU when he got the call to be Washington's "quarantine quarterback." Now he might start Week 17 with the division at stake.

Haskins didn’t initially speak to media after the game, but then did later:

The PR team for the Washington Football Team tried to get in touch with Dwayne Haskins to speak with the media.

They can't get a hold of him.

NFL rules state that the starting quarterback has to speak with the media after the game.

I'm sure another fine is coming for Haskins.

Update: Team PR was unable to get in touch with Haskins.

So he will not be talking. https://t.co/5T2bzAKayr

Haskins initially declined. Then told Wash PR he wasn't sure if he had to talkl a QB always talks and Heinicke filled that role. Said he was unreachable b/c he was driving. Now home.

Sources close to the situation said Dwayne Haskins did not turn down requests to speak to the media today and that he was informed that Taylor Heinicke would be meeting with reporters and he could go home. Haskins subsequently spoke to reporters tonight. https://t.co/jsi4yZm6Nw

On the day against Carolina, Haskins completed 14 of 28 passing attempts (50 percent) for 154 yards and two interceptions, a line that explains why you’d bench him for a quarterback signed earlier in the month who was last seen not even seeing the field for the XFL’s St. Louis BattleHawks. And Heinicke put up a much better line than Haskins, completing 12 of 19 passes (63.2 percent) for 137 yards and a touchdown. Granted, his numbers came in the fourth quarter of a game where the Panthers held a 14-point lead when he entered, but this was a day where Haskins really struggled, and Heinicke certainly looked more competent. And Washington coach Ron Rivera wouldn’t commit to who he’ll start next week:

Could he remain the starter? "We'll have to see."

It’s also notable that Washington’s game against the Philadelphia Eagles next week will determine the winner of the NFC East:

∙ Washington: Win and they're in the playoffs
∙ Cowboys/Giants: Winner of this game gets in if Washington loses to the Eagles pic.twitter.com/h3a4PR8vna

So we’ll see if Haskins is able to work his way back to contributing in that game, or if Washington goes with Smith or Heinicke. And we’ll see what’s ahead for Haskins in Washington in the long run. Maybe things will turn around, but this week’s events certainly didn’t help his status there.