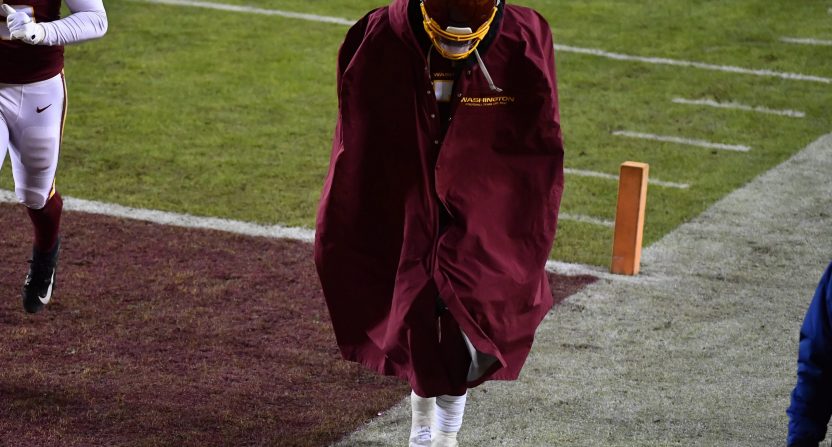 20 short months ago, Dwayne Haskins was the third quarterback off the board in the 2019 NFL Draft. Washington took him 15th overall, and it looked like the franchise finally had their long-term answer at QB.

The Haskins era came to an abrupt end on Monday morning, when Ron Rivera (who, it should be noted, was not the franchise’s head coach when Haskins was drafted) and the team announced that Haskins had been released.

This comes after Haskins was benched in favor of Taylor Heinicke during a 20-14 loss to the Carolina Panthers on Sunday. Earlier in the week, Haskins was fined $40,000 and stripped of his captaincy after violating the NFL’s COVID-19 protocols.

At the risk of going Captain Obvious on your asses, Rivera never seemed all that enamored with Haskins. He was benched after the first four weeks of the season, during which Washington went 1-3, after throwing four touchdowns, three picks, and 939 yards. Kyle Allen replaced him and also went 1-3, despite throwing for four touchdowns, one pick, and 610 yards. The carousel then moved along to Alex Smith, who won four games in a row before an injury forced him out and pushed Haskins back into the spotlight. Losses to Seattle and Carolina didn’t help his case on the field, and the off-field shenanigans sealed the deal.

It’s far too early to judge the 2019 QB class, but early returns aren’t promising. Kyler Murray looks like a future star in Arizona, but has been inconsistent. Daniel Jones has shown flashes of brilliance for the Giants, but has also been inconsistent. Haskins has stunk. Drew Lock has taken a step back this year for the Broncos. Gardner Minshew was great for the Jaguars last year, injury-plagued this year, and looks like he’ll be pushed out the door in the spring for Trevor Lawrence. The rest of the QBs taken a year ago consist of backups and third stringers.

A year ago, Washington picked second overall, and took Chase Young out of Ohio State. Young has been great, but passing on both Tua Tagovailoa and Justin Herbert may sting in hindsight. If Washington manages to win the NFC East, which they’ll do with a win on Sunday night against the Eagles, their draft pick will plummet out of the top 20 in 2021. The team does have an extra third round pick from the Trent Williams trade, but would they be able (or even want) to trade up if a non-Lawrence QB they like is still on the board as the first round moves along?