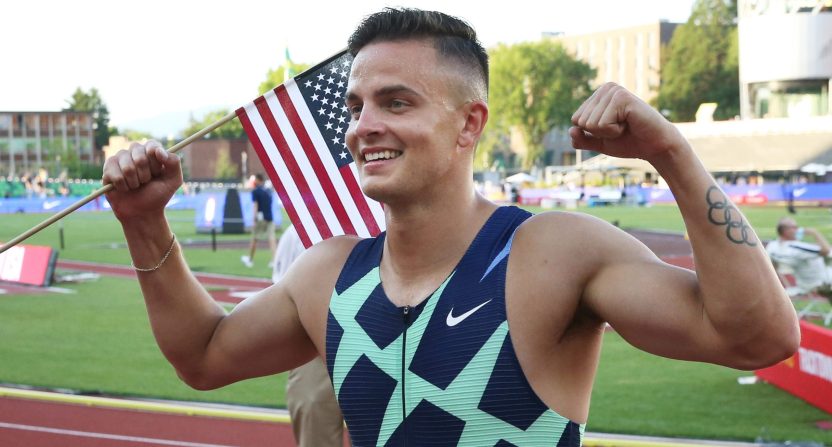 We have seen from players like Tyreek Hill of the Miami Dolphins that speed is one variable that can be a game-changer when it comes to the skillset of a wide receiver.

While the Philadelphia Eagles seemingly tried to shore up their passing game this offseason by trading for A.J. Brown, Brown isn’t their only receiver making offseason headlines. Judging by his performance in a track and field event this weekend, Devon Allen might be able to become a notable speed threat for the Eagles’ offense.

The Eagles decided to take a chance on Allen this offseason, signing him to a three-year deal back in April. Allen participated in both football and track at Oregon from 2014-2016, but has not played football since 2016, as he has been pursuing his track career since his time with the Ducks.

It remains to be seen if Allen will even make the Eagles roster. But he does have speed that could be game-breaking.

Allen took part in the USATF NYC Grand Prix on Sunday, a track and field event where he was able to take home first place in the 110-meter hurdle event with a time of 12.84 seconds, . That was the third-fastest time in history for that event. The world record is 12.80 seconds, set by Aries Merritt back in 2012 in a Diamond League event in Belgium.

Allen was also up against some stiff competition. He beat Grant Holloway, who won silver in this event at last summer’s Tokyo Olympics. Holloway also holds the second-fastest recorded time for the 110-meter hurdles, posting a time of 12.81 seconds in a semifinal heat at the Olympic trials last summer.

As far as balancing both track and football at the professional level, Allen has said that he plans to participate in the USA Track & Field Outdoor Championships this month, as well as the World Athletics Championships in July. After that, he plans to shift his focus to the football field for the Eagles. But he told reporters after Sunday’s race that training towards both sports has helped him so far, and he thinks even Merritt’s record might be in reach:

“When I’m doing so much — like football and track, trying to balance them both — I need to be really conscious of my recovery, my sleep, my diet, everything like that,” Allen told reporters after the race.

“So it had me locked in a little bit more, and obviously it’s working out.”

…“I thought I could break the record today,” he said. “Clean up a few things, and four hundredths of a second is four thousandths of a second per hurdle, which is so small. Going to have to wait for another race.”

Allen may have an uphill battle to make the Eagles’ roster and make a big impact in Philadelphia next season. But it would certainly be a great story if he is able to make the roster and provide a spark on the Eagles’ offense moving forward. And he does definitely have speed.