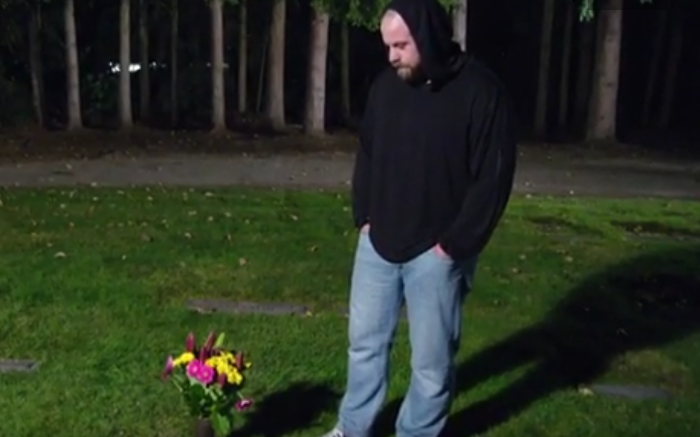 Philadelphia Eagles’ long snapper Jon Dorenbos has one of the most tragic backstories you can imagine.

When Dorenbos was 12, he was playing at a neighbor’s house when his father killed his mother over an argument and hid her body in his car’s trunk. Dorenbos returned to his house later that day, but his father made excuses about where his mother was. He didn’t find out what was going on until his father turned himself in to the police the next day. He spoke to NFL Network’s Mark Kriegel Sunday about the situation and about how he eventually came to forgive his father:

That’s a remarkable piece, featuring Dorenbos reading from the journals he wrote back then as part of the therapy process. It also discusses how Dorenbos took up magic tricks to help himself cope; we’ve seen his remarkable illusion skills before, as he finished third on America’s Got Talent this year and showed off for Jon Gruden and Ellen DeGeneres, but it’s interesting that he only took up that hobby as a result of what was going on with his family. Here’s what he told Kriegel about what magic tricks meant to him:

“To me, magic was really, really cool, and it’s something that got me out of a very, very dark place. Little did I know that when I was just a kid shuffling cards, it’s the only time I was just a kid. It’s the only time I didn’t think about anything else, except how cool this moment was. As I’ve gotten older and I remember going back to the dark places I was at as a kid, I remember what magic did for me, and I’ve never forgotten that. Magic was my ladder getting out of hell.”

Remarkably, Dorenbos was able to forgive his father, as he told Kriegel.

“I forgave him a long time ago. I remember, I was in my twenties, I said ‘If I want to really be something in this world, if I want to really do things, I’ve got to get rid of this.’ I had to forgive my dad to move on with that, but what I had to learn how to do was forgive myself. I had this guilt that if I forgave my dad, my mom would hate me for life. And so I kind of came to this realization that in order for me to have peace in this world, I had to come to terms with him. ‘Mom, I’ve got to do this for me.’ And sure enough, from that day forward, there was this cloud that was just lifted off my shoulders and enabled me to get through life.”

The 36-year-old Dorenbos has had an impressive 14-year NFL career, but he still thinks back to what happened while he was growing up. That piece shows footage of him visiting his mother’s grave, which he does every time he’s in Seattle. It’s got to be incredibly hard for him to go on after that, but he’s managed to find great success. Dorenbos has become a dependable snapper, appearing in 161 straight games for the Eagles (the second-longest streak of all time), and he was greatly missed after getting hurt Sunday against Washington. It’s truly remarkable to see what he’s been able to accomplish despite tragedy.