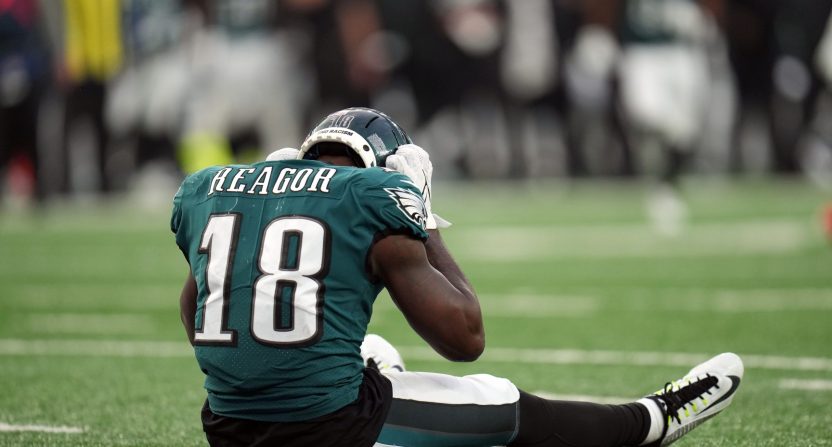 The Philadelphia Eagles decided to select wide receiver Jalen Reagor in the first round of the 2021 NFL Draft, but things have not worked out to plan in his career to this point. His future in the NFL may be in jeopardy following Eagles head coach Nick Sirianni’s latest comments on the former TCU star.

Sirianni discussed how Reagor fits in with the Eagles roster for the upcoming season after a disappointing two years in the NFL thus far, and he did not mince words with his role on the team at the moment.

“We have great depth at the wide receiver position,” Sirianni said via Pro Football Talk. “He’s battling. He’s battling for a spot, and he is working with the twos right now. He’s gotten a lot of balls over the last two days out here, so he’s done a nice job and he is battling for a spot, he’s battling for his return spot. He’s worked hard in the offseason to come back in great shape. That’s something that we all noticed in the conditioning test, how good of shape Jalen was in.”

While Sirianni praised the shape that Jalen has come into training camp in, it is very concerning for Reagor that he does not have a clear role with the team at this point in his career.

He was notably taken before wide receivers like Justin Jefferson, Tee Higgins, Michael Pittman Jr, and Chase Claypool in the 2020 NFL Draft, who have all out-performed him drastically to this point.

The Eagles made a big move this offseason in trading with the Tennessee Titans for star wide receiver A.J. Brown to play alongside 2021 first-round pick Devonta Smith, which further indicates that the team has little trust in Reagor next season.

Reagor may be running out of chances in Philadelphia, and it looks like he will need to have an impressive training camp if he wants to be part of the Eagles’ future moving forward.