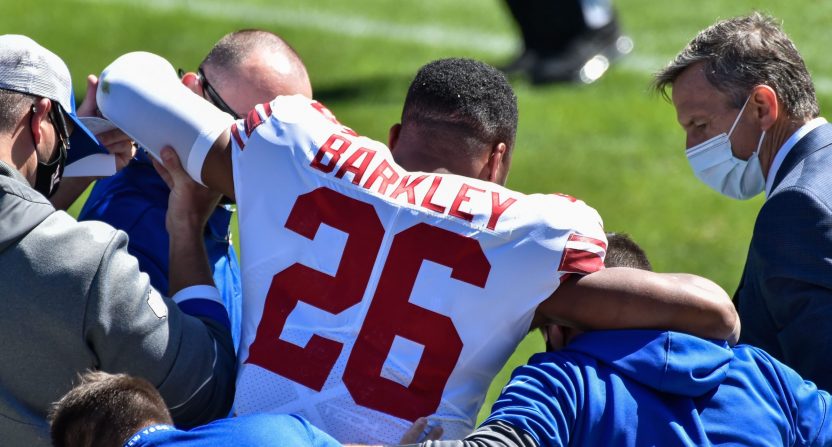 Sunday was one of the most injury-plagued days in NFL history, which could be an indication that a scaled-back offseason and a nixed preseason could cause problems throughout the league early this year. Here’s a rundown of the teams hit the hardest thus far.

They lost safety Malik Hooker and wide receiver Parris Campbell to long-term injuries in Week 2, which is problematic with Marlon Mack, Jack Doyle, and Kemoko Turay already down. It’s not code red yet in Indy, but they can’t afford to lose many more guys.

Saquon Barkley was by far and away this team’s best player. Losing him for the season to a torn ACL is crushing, especially with veteran left tackle Nate Solder already a COVID-19 opt-out, and top receivers Sterling Shepard and Golden Tate both hurting as well. Poor Daniel Jones has his work cut out for him hard as a sophomore.

The secondary has been hammered with Justin Coleman, Desmond Trufant, and high-buzz rookie Jeff Okudah all hurt. Star wide receiver Kenny Golladay is dealing with a hamstring injury, and highly-paid new offensive lineman Halapoulivaati Vaiti has been out with a foot injury. The good news is there might not be much long-term damage, but this spate could still bury a team that is already 0-2.

The famous Dallas offensive line didn’t have Tyron Smith or La’el Collins in Week 2, which is extra tough considering standout center Travis Frederick’s sudden offseason retirement. Throw in the loss of starting tight end Blake Jarwin, and the offense can’t lose many more straws before the camel’s back breaks. And on the other side of the ball, they’ve lost Gerald McCoy, Leighton Vander Esch, Sean Lee, and Anthony Brown already.

Offensive starters Le’Veon Bell, Connor McGovern, and Breshad Perriman have all been hit, rookie wide receiver Denzel Mims is on injured reserve, and they’re still waiting on Avery Williamson to return from a torn ACL in order to soften the blows that came with C.J. Mosley’s opt-out and the Jamal Adams trade. It’s not easy being Adam Gase or Sam Darnold right now.

No Drew Lock at quarterback, no Courtland Sutton at wide receiver, no Phillip Lindsay at running back, right tackle Ja’Wuan James is a COVID-19 opt-out, and they’re without Von Miller and A.J. Bouye on defense. This was supposed to be a promising season in Denver, but with those injuries, the team has no shot in the AFC West.