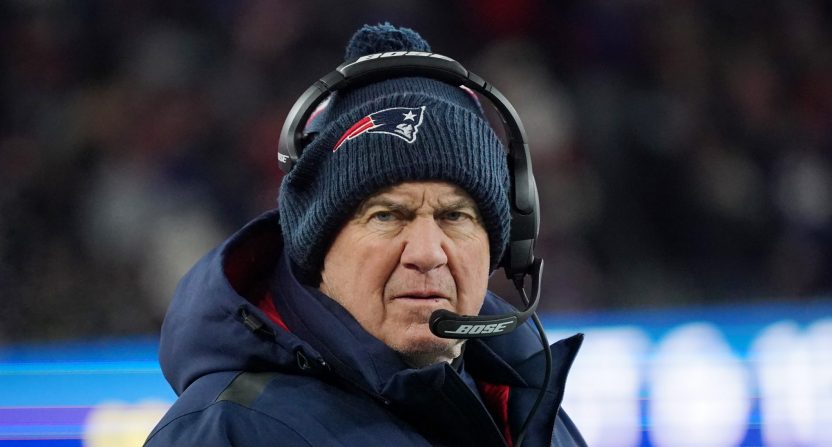 Now that the heart of the 2020 NFL offseason is complete, let’s look at the glass half-empty. Here are eight teams that suffered significant declines in March and April.

New England Patriots: Gone are Tom Brady, Rob Gronkowski (or any hope he’d return), Jamie Collins Sr., Kyle Van Noy, Danny Shelton, and Duron Harmon. None were truly replaced. With that much talent out the window, it’s possible the Pats are open to tanking for a shot at presumed top 2021 draft pick Trevor Lawrence.

Houston Texans: When you trade away one of the game’s top three wide receivers and all you get in return is aging, expensive running back David Johnson, and when you can only attempt to replace that receiver with Brandin Cooks (who has injury concerns and nobody seems to want), you took a hit. DeAndre Hopkins and Co. are really going to miss Deandre Hopkins, but don’t forget that Houston also lost superb defensive tackle D.J. Reader. Oh, and they didn’t have a first-round pick. Nice work, Bill O’Brien.

Jacksonville Jaguars: In a somewhat clear attempt to tank and start from scratch, they traded away key defenders Calais Campbell and A.J. Bouye, and dealt veteran quarterback Nick Foles. But I write “somewhat clear” because they confusingly paid big bucks for good-not-great linebacker Joe Schobert, and they have yet to sell off disgruntled, pricey edge defender Yannick Ngakoue. The Jags are a mess that will be relying on a poorly-supported sophomore sixth-round pick under center, and a defense that is a shell of its former self.

Green Bay Packers: They hardly participated in free agency as Blake Martinez and Bryan Bulaga walked, they didn’t get markedly better by using their first two draft picks on a backup quarterback and a No. 2 running back, and now Aaron Rodgers might be furious because they’ve done nothing more to support him ahead of his age-36 season. What are they thinking?

Minnesota Vikings: Minnesota actually rode out turbulence pretty well this offseason. They were in a bad spot with a huge salary-cap jam and a slew of in-house free agents, but they turned Stefon Diggs into Justin Jefferson (younger, cheaper, higher ceiling), and they at least kept standout safety Anthony Harris. The problem is they’re now without their top three cornerbacks from 2019, as well as veteran pass-rusher Everson Griffen. Even with first-round pick Jeff Gladney joining the fray at corner, it will be hard to replace those guys.

Chicago Bears: Congrats on signing aging pass-rusher Robert Quinn, I guess? But the Bears are going to miss underrated linebacker Nick Kwiatkoski, they already gave up on Leonard Floyd, Trey Burton, and Taylor Gabriel, and adding Foles likely won’t solve the quarterback problem. Throw in that they again lacked a first-round pick, and this offseason represented another net loss for a team headed in the wrong direction.

Carolina Panthers: They replaced Cam Newton with Teddy Bridgewater. We can debate whether that’s a net loss or gain, but there’s no replacing retired star linebacker Luke Kuechly, and they also lost top cornerback James Bradberry along with veterans Mario Addison, Gerald McCoy, and Vernon Butler. Oh, and they parted ways with tight end Greg Olsen. Just a brutal stretch for this team, and top pick Derrick Brown can’t singlehandedly make up for that.

Los Angeles Rams: Giving up on Todd Gurley couldn’t have been easy, but they might actually be hit harder by the losses of starting front-seven defenders Cory Littleton and Dante Fowler Jr. Throw in Eric Weddle’s retirement and the walking papers they were forced to give to Nickell Robey-Coleman and Clay Matthews, and that defense is looking pretty barren beyond Aaron Donald and Jalen Ramsey. Without those guys as well as Cooks, it’s beginning to look as though the Rams went all-in and are about to bust.