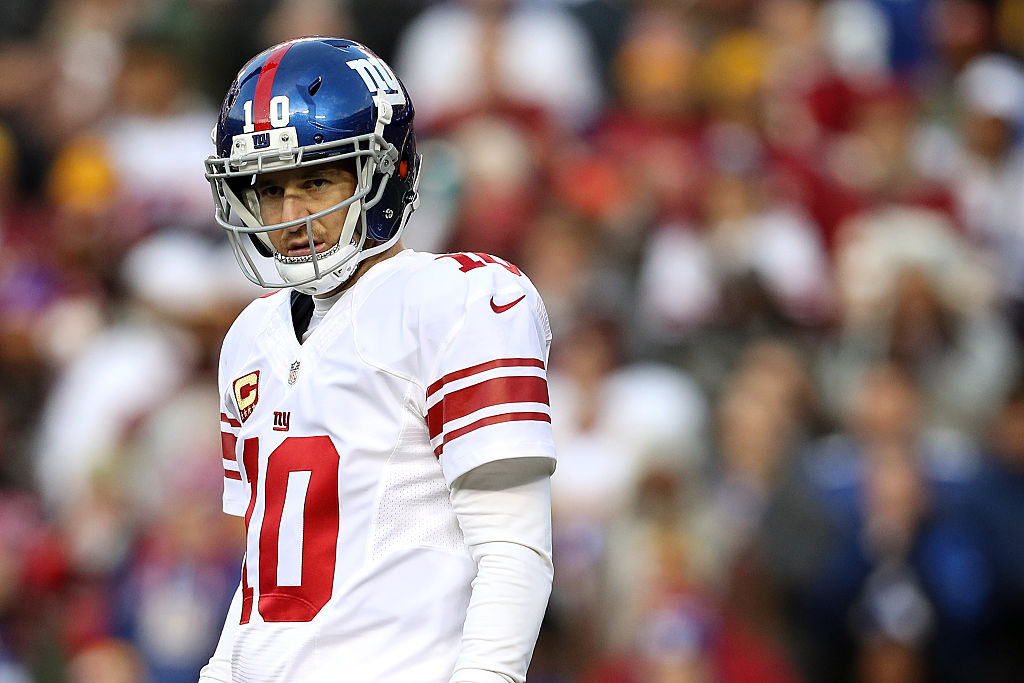 Whether Giants fans want to admit it or not, now is the perfect time for the franchise to begin the transition to the post-Eli Manning era. The two-time Super Bowl MVP will forever be one of the most respected Giants players in franchise history, and deservingly so, but the time has come to turn the page.

The Giants are a dreadful 2-11 this season as they prepare for a home game against the NFC East champion Philadelphia Eagles this weekend. It is expected Eli Manning will continue to be the team’s starting quarterback after the team botched the handling of Manning a couple of weeks ago.

Manning was benched in favor of Geno Smith by Ben McAdoo in a move that actually made some sense from the standpoint of evaluating options for the future in a lost season. But the move was handled so poorly and it ended up being the final decision McAdoo and former general manager Jerry Reese would make for the Giants. Both men lost their jobs a day after a loss to the Oakland Raiders. Steve Spagnuolo took over as an interim head coach and immediately inserted Manning back into the starting lineup, and Giants owner John Mara spoke about the franchise needing to make some drastic changes moving forward.

As the Giants continue to sink in the standings, the franchise is about to lock down the second overall pick in the NFL Draft. This will give the Giants the perfect opportunity to draft a central player that could be the focal point of the next era of Giants football. With a handful of quarterbacks worth considering, the Giants must begin evaluating all of their options at quarterback, because Manning is not going to be around forever. The question of just how long Manning will stick around is also being thrown on the fire right now as well.

It has been reported Manning would not take kindly to taking on a one-year role as a mentor to his eventual successor in New York. Manning, 36, still believes he has what it takes to play at a high level for another four years or so. That may be true, but only if he is in the right situation with talent around him to thrive.

The Giants have done a horrible job of protecting Manning and injuries have led to some rough performances in the passing game all season long. But if the Giants use a high draft pick to select a potential new franchise quarterback, don’t expect Manning to rest quietly. Remember, this is the same quarterback who forced his way out of going to San Diego when he was originally drafted. Do not be surprised if Manning forces himself out of New York as the franchise potentially turns the page regardless of Manning’s opinions on the situation.

But perhaps the better question is where Manning could potentially go to finish out his career with one more chance to make a run to a Super Bowl? There are a few options that could be interesting for different reasons.

The Denver Broncos would appear to be the most logical landing place for Manning. After all, it’s worked out before for the Manning family in Denver, right? The Broncos have scuffled at quarterback all season long and the struggles extend back to last year.

The drafting of Paxton Lynch has not paid off as initially hoped for John Elway and the Broncos and hoping to get by with Trevor Siemian is just not the answer for the Broncos in the long run. If Eli Manning were to go to Denver, he would have to live up to his older brother Peyton Manning’s legacy though, and that may not make for the ideal situation for Eli. But if not Denver, what other options would make sense for Eli?

One popular team that continues to be tossed out as an option is the Jacksonville Jaguars, in part because Manning’s long-time head coach Tom Coughlin is in an executive role with the Jaguars. That nugget is not to be dismissed given the success the two had together with the Giants.

Blake Bortles is too much of a roller coaster ride for the Jags to consistently rely on, and the Jags have some good young talent on the roster that could make for a quick transition for Eli. But if Manning didn’t want to ball in San Diego, what is going to make him want to suit up and play in Jacksonville (and London)?

And if the Jaguars win the AFC South with Bortles, would the franchise even consider making a quarterback change for an aging Manning? If the Jaguars were on the doorstep of the Super Bowl, maybe. But the Jaguars are not at that point yet.

Basically, any team in need of a quarterback should probably take a flyer on Manning. He may not be Peyton, but Eli has done more than enough to earn his keep in the NFL over the course of his career.

But just needing a quarterback is not enough to win any potential Manning sweepstakes. After all, the Cleveland Browns need a quarterback but there is not a chance Manning would head there. Manning will want to land in a franchise that is ready to compete right away. Denver and Jacksonville could potentially be those options. So could Washington if the Redskins move on from Kirk Cousins. Two other options could be the Arizona Cardinals and New Orleans Saints, but only if we have reached the end of the line for Carson Palmer or Drew Brees (and Manning playing for the Saints would just be too perfect after his father became a bit of a fan-favorite in New Orleans).

Or maybe Manning could avoid the hassle of moving and just sign a contract with the Jets. That would certainly be fun to watch in the New York tabloids, if nothing else.

1 thought on “It’s time for Eli Manning to get a clean slate somewhere else, where could he go?”