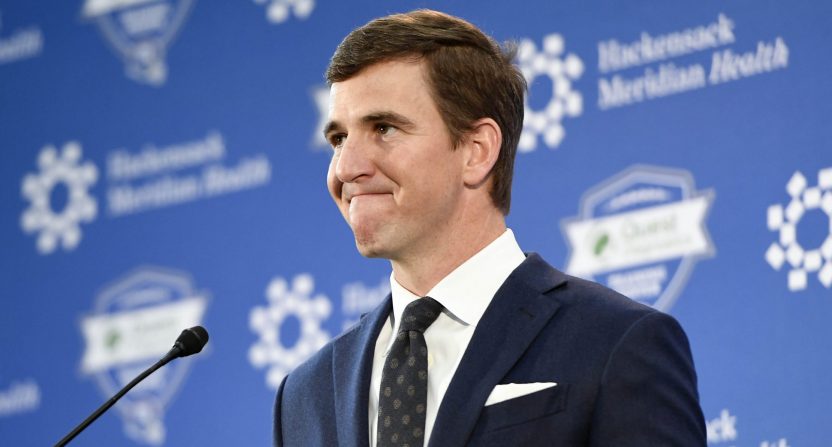 Announcing sports is one of those jobs that everybody thinks they can do right until it comes time to announce sports. It requires hours of hyper-concentration, even in settings as loose as the ManningCast on Monday Night Football. It’s understandable when professionals like Eli Manning say something in a way they regret.

That happened Monday night, during the Dallas Cowboys and New York Giants broadcast, when Manning joked that the Denver Broncos should have paid $235 million to their punter, Corliss Waitman, instead of quarterback Russell Wilson.

"They should have paid that punter $235 million instead of Russell…" – Eli 😲😂 #ManningCast pic.twitter.com/iPMf1W2C1M

It was a harmless joke, but Manning felt the need to walk back the comments.

“I don’t think we’re trying to be critical,” Eli said to Pro Football Talk. “I think we always try to support the guys that are in the game. I think sometimes, ‘Hey, it’s live TV.’ I never try to take a real shot at somebody. I think that was obviously a very outrageous joke — because a punter had 10 punts. Nothing against Russell. He’s going to do great.”

It’s understandable why Manning would be quick to amend any statement as his show, the ManningCast, relies on a consistent cast of characters.

Manning is next in action on Monday when he travels to the Bay Area for Los Angeles Rams-San Francisco 49ers contest.