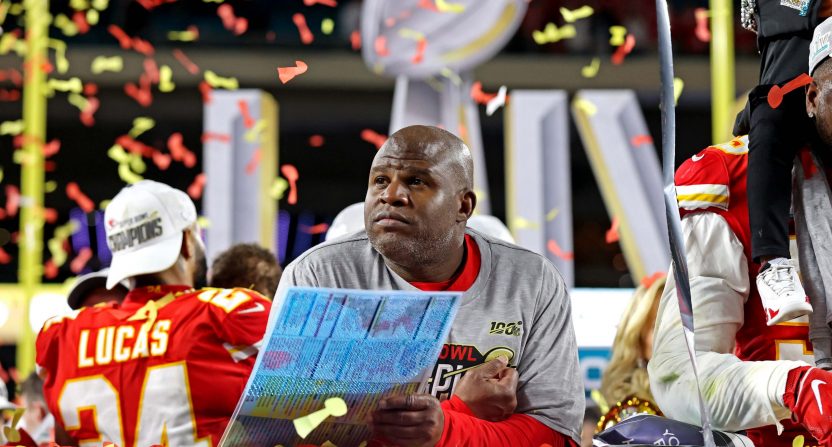 On Tuesday, ESPN’s Adam Schefter reported that Kansas City Chiefs offensive coordinator Eric Bieniemy would emerge as a candidate for the USC Trojans head coaching job, according to his NFL sources.

League sources believe Chiefs' OC Eric Bieniemy will emerge as a head-coaching candidate for USC. Bieniemy is from Southern California and has told confidantes in the past, that USC is one of the only college jobs that might interest him.

According to Schefter, Bieniemy had previously expressed that he would be interested in the USC position, which became available on Monday when Clay Helton was fired.

Many other NFL and college football coaches have been linked to the job, including Jacksonville’s Urban Meyer, Cincinnati’s Luke Fickell, Oregon’s Mario Cristobal, and Fox host Bob Stoops. Many of those potential candidates have denied interest in the job, except for Stoops, who seemingly left the door open.

Bieniemy was asked about the possibility of the USC job during a Thursday press conference and he responded by saying he’s keeping his focus on the task right in front of him.

“Well you know me — you guys know me. I am where my feet are,” Bieniemy said. “So when it’s all said and down with, I am focused on the task at hand. I’m not worried about anything where my name is being mentioned. My job right now is to make sure that we’re preparing for this weekend’s opponent.”

As for whether or not he has an interest in the job, Bieniemy reiterated that he’s focused on the Chief’s upcoming game against the Baltimore Ravens. Though, he also didn’t say he wouldn’t listen to any offers.

“I think you guys know me better than that,” Bieniemy said. So if USC reached out to me right now, my answer would be I am preparing for this team to play against the Baltimore Ravens. And that’s how I roll, you guys know that. I am where my feet are, okay? My job is to make sure we’re ready to play a complete, sound, 60-minute football game where we can come out and win the game.”

Bieniemy is routinely considered one of the most talented assistant coaches in the NFL and has interviewed for tons of head coaching roles around the league the last two seasons. However, he has been passed over on every occasion, for reasons that may or may not be valid. While he shouldn’t have to prove himself on the college level in order to get an NFL head coaching gig, it will be interesting to see if Bieniemy ends up considering a move to that level in order to take the next step in his career. Or will he stick it out and try to prove himself once more with Kansas City in order to break through as a head coach there.