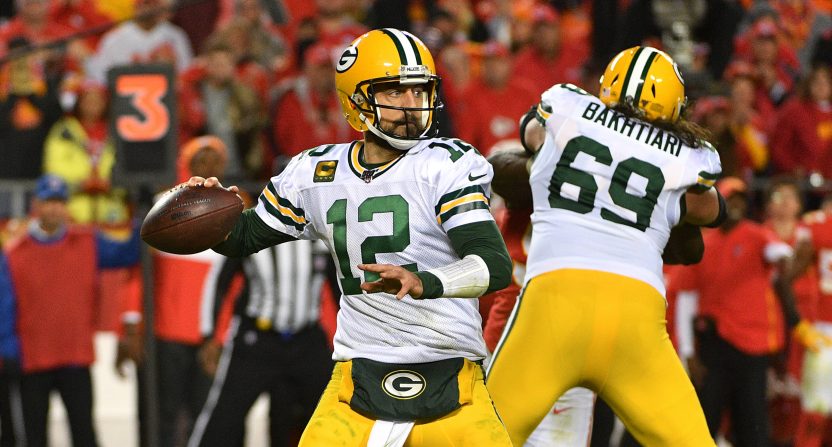 As we hit the halfway point of the NFL regular season, we have a clearer picture of which quarterbacks are performing well and which aren’t. Russell Wilson and Deshaun Watson are MVP candidates, while players like Baker Mayfield and Jared Goff have underperformed relative to expectations. Let’s take a look at the best and worst QBs in the league this season, and what their performance means for their teams.

Green Bay’s 7-1 record, tied for second in the competitive NFC, has helped elevate Rodgers into legitimate MVP consideration. He remains arguably the best and most talented QB in the league, and he has pushed a Packers offense forward despite a weak receiving corps that has missed Davante Adams due to injury.

Wilson and Watson are probably better MVP candidates right now, but Rodgers has begun to excel in Matt LaFleur’s offense, which has improved since their early-season growing pains. Green Bay’s Week 7 demolition of Oakland was, by any metric, Rodgers’s best performance of his career. He threw six touchdowns, completed 80 percent of his passes, and finished with his first perfect passer rating. Only a 31-3 2009 win over Cleveland, in which Rodgers finished with a 155.4 passer rating, comes close.

It’s hard to say we’re seeing the absolute best of Rodgers, given how shiny is career is, but he is playing extremely well right now. LaFleur is doing a good job of integrating running backs and tight ends into the passing game to force mismatches; Aaron Jones is third among running backs in receiving yards, behind Austin Ekeler and James White, and he produced 159 receiving yards and two TDs in Kansas City last week.

Rodgers with a modern, progressive offense is fun to watch. Green Bay’s Week 12 matchup against undefeated San Francisco will be fascinating.

Watson and Patrick Mahomes reside alone in the top tier of younger NFL quarterbacks. Mahomes is unassailable at the very top, but Watson has proven himself as one of the best QBs in the NFL this year as he drags the Texans offense into AFC South contention.

Houston is 5-3 and second in their division, with a Week 7 loss to the 5-2 Colts potentially looming large. A soft schedule the rest of the way, outside of games against the Patriots, Ravens and Indianapolis, bodes well for the Texans. Watson will need a winning record and a playoff berth to have a shot at winning MVP.

Given how valuable Watson is to the Texans, he should be in contention by the end of the season. His completion percentage nears 70 percent, and he ranks fourth in QBR. He is also very good at explaining football concepts.

At this point, Wilson should be considered the third-best QB in the league, behind only Rodgers and Mahomes. He is having a fantastic season, despite a below-average Seahawks offensive line (21st in Football Outsiders’ adjusted sack percentage) and playcallers who lean too much on the run game. Per Pro Football Reference, the Seahawks have run 59 offensive plays when tied this season. They’ve run the ball on nearly half of those snaps.

Wilson is tearing up defenses (except for maybe the Ravens’). He’s first in QBR and third in adjusted yards per attempt. His completion percentage above expectation ranks third in the league at 7.9 percent, meaning he is completing more passes than an average QB would be expected to complete given Wilson’s attempts. He’s launching the ball downfield with regularity; his average intended air distance is 9.9 yards, ranking fourth.

He has been impressively safe and efficient with his throws, despite the difficulty of them. With an interception percentage of just 0.4 percent, he is tied with Mahomes and narrowly ahead of Rodgers for the lowest in the league.

I could go on. Seattle is 6-2 in a tight division, with two games against the 49ers remaining. They have a legitimate shot at catching San Francisco and holding off the Rams in the NFC West. Wilson is the primary reason for that.

Mayfield’s statline from the Browns’ Week 8 loss to the Patriots wasn’t great, but it wasn’t nearly as bad as one might expect from a (currently) below-average QB going up against one of the best defenses in league history: 20/31, 194 yards, 1 TD, 1 INT. That performance, while somewhat respectable, does not prevent Mayfield from looking like one of the worst starters in the league this year.

The @Patriots defenders all have magnets for hands 🧲 pic.twitter.com/GgpbZdOy1m

Mayfield has thrown 12 interceptions against just six TDs. His average yards per attempt is fifth-worst, with the two Miami QBs propping him up. Next Gen Stats has him completing passes at a clip of 5.5 percentage points lower than average, tied for the worst among QBs who have consistently played. Mayfield has a completion percentage of 57.6 percent and an expected completion percentage of 63.2. Regardless of how much you trust those analytics, you have to admit that Mayfield has not been great this season.

The much-hyped Browns are 2-5, and while their schedule up to this point has been tough, Mayfield’s performance has to be troubling. His offensive line hasn’t helped, and coach Freddie Kitchens is firmly on the hot seat seven games into his tenure due to poor offensive playcalling, but Mayfield is mired in a serious sophomore slump.

He will have to improve for the Browns to have a chance at climbing back into contention. The AFC North is arguably the weakest division in the league, so anything is possible.

Scroll back up the Mayfield section and you’ll see that a QB is tied with Mayfield for the worst completion percentage above expectation among starters. Goff is that QB. Despite playing in a considerably better situation than Mayfield, given the presence of Sean McVay, Goff has mostly struggled this season.

His big-money contract extension looks worse and worse by the minute. The Rams are unexpectedly 5-3, with a tough mountain to climb in an incredibly difficult division. Goff wilted against the Niners’ menacing defense a couple of weeks ago, and while he has regained some trust with easy wins against the lowly Falcons and Bengals, we’ve yet to see him come through against higher-quality opposition this year.

It’s easy to say that teams are using the Patriots’ Super Bowl blueprint to beat him, but it’s looking more and more like Goff is not a difference-making quarterback. He needs the Rams’ system to prop him up. So far this season, it hasn’t done well enough to keep the Rams in the league’s top tier. Goff has to show something more to help his team climb, and to justify the money they gave him.

Confidence in Trubisky among Bears fans and general football observers is waning. In the five games Trubisky has started and played out, the Bears are 2-3, and haven’t performed well offensively. They scored three points in one game and 16 points in two others. He has underperformed in his expected completion percentage, and is fourth-worst in adjusted yards gained per attempt.

Chicago is 3-4 overall, with little confidence that Trubisky is the right QB to lead them forward. With how good the defense is, they might not want to waste any more time with a QB who hasn’t shown significant signs of improvement.