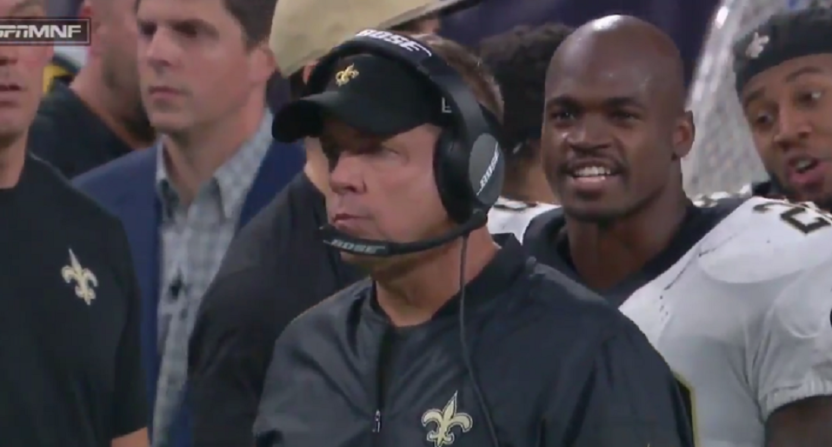 Adrian Peterson is a former NFL MVP, seven-time pro-bowler, four-time first-team All-Pro, and former first-round pick. On Monday, the 32-year-old played not only in his first game as a member of the New Orleans Saints, but also his first game ever against the Minnesota Vikings, his former team. From 2007 to 2016, Peterson played in Minnesota and was their star running back.

Naturally, in his first game with a new team and against his former team, Peterson probably wanted to put together a huge performance.

Well in his first game back in Minnesota, Peterson didn’t play well in the Saints’ 29-19 loss. Then again, the running back only had 18 rushing yards on six carries (receiving wise, he had no catches and just one target).

Peterson surely wasn’t very pleased with his performance and usage, and late in the first half, the ESPN cameras caught Peterson seemingly unhappy with Saints head coach Sean Payton.

We obviously can only speculate as to what was happening there, but it didn’t seem like a pleasant exchange. And Twitter certainly had fun with it:

"frankenstein was the name of the doctor" pic.twitter.com/2jbhthzJQW

He's speaking for my fantasy team

Adrian Peterson look like he bout to throw hands with Sean Peyton pic.twitter.com/0qqkqsntBm

Used to be a joke that Sean Payton could have Adrian Peterson & he still wouldn't run the ball, it's not funny right about now

"CAN SOMEONE TELL ME WHAT A PO'BOY IS?" pic.twitter.com/eobkgrdvOF

Sean Payton: "What if instead of having one super unhappy running back we don't use properly, what about three?"

And finally, this may be unrelated for the most part, but it still applies in a way.

Why Sean Payton always got that "Blue Steel" look pic.twitter.com/g3OqVitjo5

UPDATE: After the game, Adrian Peterson responded to a SportsCenter tweet about the incident.

Let's be clear…I said we need to run the ball up their Donkey. Nothing more. I'm passionate but respect my coach at the same time