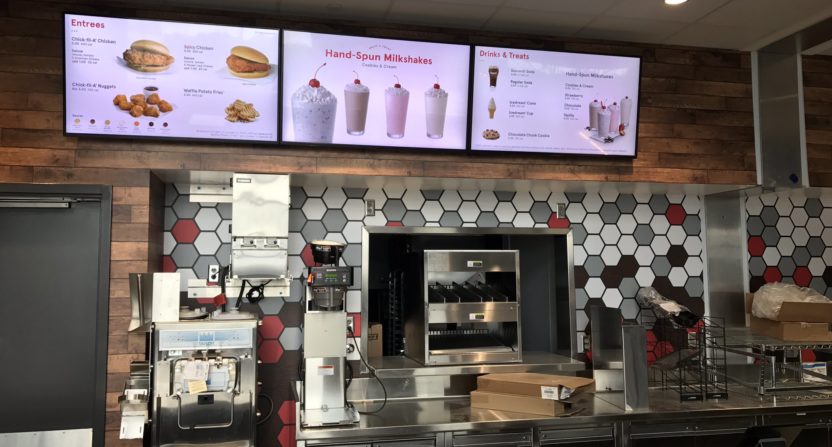 Chick-fil-A is a Georgia institution unlike most others, so it’s only natural that the Atlanta Falcons’ new stadium—already a pioneer in stadium concessions—will have a Chick-fil-A.

There’s only one problem: Chick-fil-A isn’t open on Sundays anywhere in the country, and Mercedes-Benz Stadium won’t get an exception.

Zaxby's now the official chicken of the Falcons. That doesn't mean Chick Fil-A isn't in the new stadium. It is closed on Sundays, however. pic.twitter.com/TfCIa3rz5T

That means the Chick-fil-A will only be open for one regular-season Falcons game this year, because seven of the team’s eight home games are on Sundays. The only non-Sunday home game will be on a Thursday against the New Orleans Saints.

Mercedes-Benz Stadium will, of course, hold many events that aren’t Falcons games. And for Falcons fans hoping to get their Chick-fil-A fix on Sundays, an Atlanta native has a plan.

But Falcons fans who need their breaded-chicken fix on Sunday might have a good-enough substitute. Atlanta restaurateur and former “Top Chef” contestant Kevin Gillespie will be selling his COS chicken sandwich from a stand on the 200 concourse.

“The fast-food chain Chick-fil-A is based here in Atlanta,” Gillespie wrote on his website along with a COS recipe. “They’re closed on Sunday for religious reasons. I respect that. But why is it that I crave a Chick-fil-A chicken sandwich almost exclusively on Sundays? It’s like clockwork. I wake up on Sunday morning and think, ‘You know what would be really good right now? A Chick-fil-A sandwich.’ Like most food companies, they guard their secret recipe. But it’s a breaded fried chicken breast on a bun with pickles. I figured I could come up with something pretty close.”