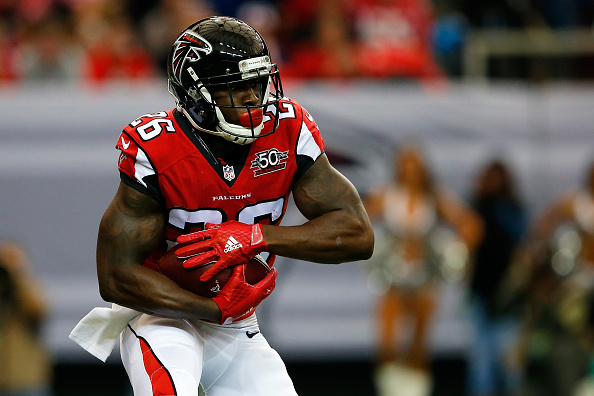 There have been tons of NFL injuries this season, but they don’t all come from football. The latest player with an unusual off-field injury is Atlanta Falcons’ running back Tevin Coleman, who’s currently going through the concussion protocol and is doubtful for Sunday’s game against the Carolina Panthers. Why’s that? Well, Wednesday at the team’s practice facility, he slipped in the shower:

Coach Dan Quinn said Coleman’s availability for the game is uncertain, as he now must pass through the stages of the league’s concussion program before getting the green light to be on the field.

“[He] fell and hit his head, and he is in the concussion protocol,” Quinn said. “That’s unfortunate.”

This is the latest blow of hard luck for Coleman, a third-round pick from Indiana University who began the year as the Falcons’ starting running back. He suffered a fractured rib in Week 2, though, and that paved the way for the emergence of Devontae Freeman, who had a Pro Bowl season with 907 yards rushing, 543 yards receiving and 10 rushing touchdowns, tied for the league lead. By contrast, Coleman has 87 carries for 392 yards and a touchdown, and this latest injury may prevent him from adding much to those totals.

Coleman’s injury is just the latest odd sports one, as we’ve seen everything from Jason Pierre-Paul’s fireworks mishap this year to Alex Stepney’s 1975 dislocation of his jaw from yelling too hard to Vince Coleman being run over by a tarp machine in the 1985 NLCS. Still, it’s not the first time that NFL showers have proven hazardous; they’re usually just more prone to cause infections than concussions. Meanwhile, ESPN’s Danny Kanell is using this to continue his crusade to end the media’s “war on football“:

Should we let our children shower??? https://t.co/zaxSj888Cm