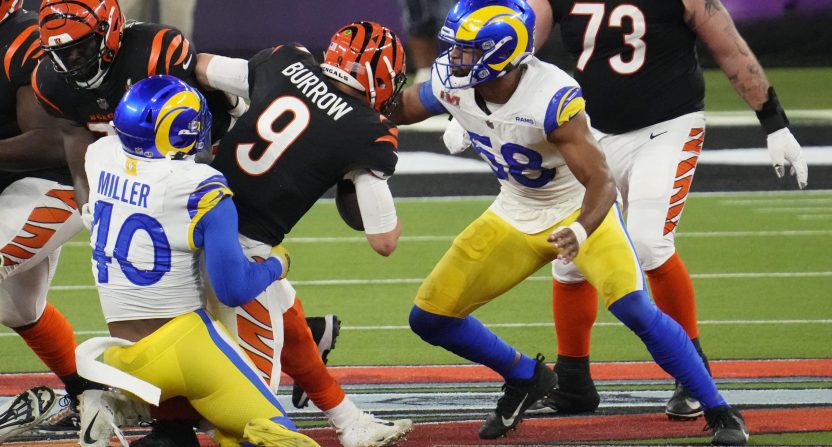 All signs (including his own social media activity) seemed to point to Von Miller returing to the Denver Broncos. That will not happen.

News broke on Wednesday that Miller (seen above) will join the Buffalo Bills. That was initially reported by Ian Rapoport of NFL Network, and later confirmed on Twitter by the Bills.

Von Miller to the #Bills.

We've agreed to terms with DE @VonMiller on a six-year contract. #BillsMafia pic.twitter.com/3px86cNx3g

Miller’s decision to join the Bills had NFL fans buzzing.

Can the AFC please just chill for like one hour. This is getting out of hand. https://t.co/eDrLyTOGxw

Several fans took notice of the terms of the deal.

That’s a lot of bills https://t.co/aptvRV9lcn

2 rings later 32 years old and still getting this type of money. The kids are set for life. https://t.co/hJ3Sy9zFgG

Given that Miller will be 33 in March, a six-year deal is notable. Though, others pointed out that, while the exact structure is presently unknown, it will probably not be a real six-year deal.

Will be interesting to see gtd money. Likely more really like a 2-3 year deal, unless they expect him to be like LBJ at 39 https://t.co/vREQQvM2Mr

We need the details for this one more than any other deal yet. Miller turns 33 in two weeks… https://t.co/4pXGANW6Hp

Reported terms are large – think on Rams side this came down to more than APY as well because they were willing to go around $17M-plus and were flexible, will be interested to see structure of this deal. That’s a lot of money. https://t.co/JvJ07ogDnE

The only logical explanation is void years and agent inflated figure. https://t.co/RkM3tSGVPX

ESPN’s Adam Schefter relayed how much of this is guaranteed up front:

In the short term, this move feels good for the Bills.

Buffalo had the NFL’s best defense in terms of both yards and points allowed during the 2021 season. But while the Bills weren’t bad at getting to the quarterback, it wasn’t a strength, either. Buffalo registered 42 sacks during the regular season, tied for the 11th best total in the NFL.

Where the lack of sacks and pressure really hurt the Bills was in the playoffs. Buffalo defenders sacked Patrick Mahomes twice during the 42-36 loss to the Kansas City Chiefs in the Divisional Round. During Kansas City’s famous (or infamous) 13-second drive that set up the tying field goal to send the game into overtime, Buffalo did little to pressure Mahomes. This was particularly notable on the play immediately before the tying kick, when Mahomes had time to find Travis Kelce for a 25-yard completion.

We don’t know if having someone like Miller might have made the difference, but it’s a pretty good bet.

While Miller may not be quite the force that he was during his prime years in Denver, he was still quite effective at getting to the quarterback in 2021. In 15 regular season games between the Broncos and Los Angeles Rams, Miller recorded 9.5 sacks. He added four more in the postseason, including two in Los Angeles’ Super Bowl LVI win over the Cincinnati Bengals.

Time will tell if this move will work. But right now, Miller seems like he could be Buffalo’s missing piece.