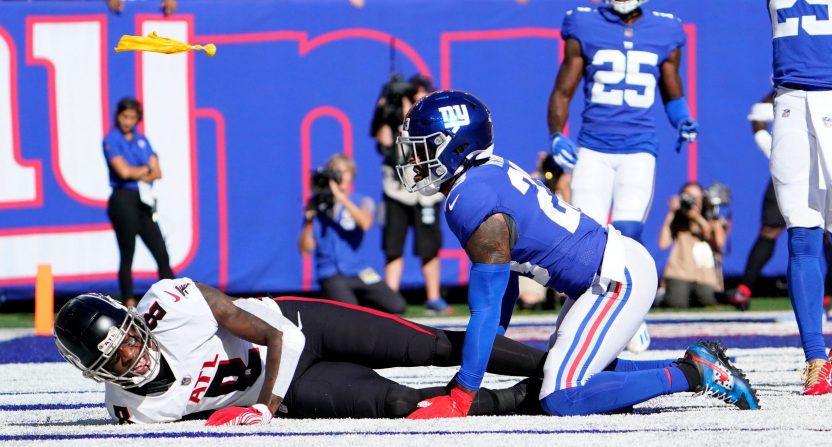 If you drafted Atlanta Falcons tight-end Kyle Pitts for your fantasy football team this season, suffice it to say that you’ve been disappointed so far.

Pitts was selected fourth overall by the Falcons in the 2021 NFL Draft, the highest-drafted tight end in NFL history. With that comes expectations that he would garner huge numbers right off the bat and be a steal for any fantasy football owner who used a high draft pick of their own on him.

Instead, Pitts has been considered a bust so far. While he has decent numbers for a rookie starter (15 receptions for 189 yards), these aren’t the kind of big stats that win fantasy football games.

However, experts have been pointing to the fact that Pitts has been targeted 26 times, is seventh in the NFL in targets and yards amongst tight ends, and is still the second option in a Falcons offense that is starting to find its groove.

This weekend, the Falcons host the New York Jets, and if you know anything about the Jets, it’s that they always present a great opportunity for an opposing offensive player to go off. And that’s exactly what a lot of fantasy football owners are hoping for this weekend.

If Kyle Pitts doesn’t go off this week, he ain’t ever going off.

Even though he’s used more as a RB, have to believe Cordarrelle Patterson gets more looks.Good chance this is Kyle Pitts break out game too https://t.co/jKTeZHRNcU

These are the type of comments savvy dynasty managers love to see!

If Kyle Pitts doesn’t go off – immediately send out offers for him. https://t.co/Gw3WacAckO

I expect a big game from Kyle Pitts on Sunday

No Calvin Ridley
No Russell Gage