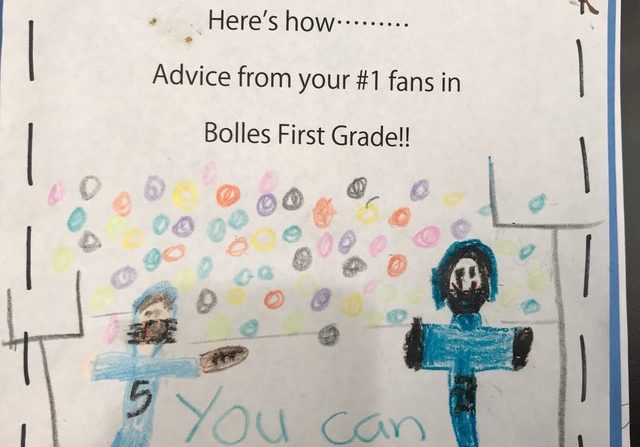 Even though the Jacksonville Jaguars have become America’s Team Du Jour, they face a daunting task this weekend when they head to Foxboro to take on the mighty New England Patriots in the AFC Championship Game.

Despite Blake Bortles running wild and running free with our hearts, the odds are stacked against the Jags in this game. They’re on the road, they’ll be playing in cold weather, and the Patriots have a guy named Tom Brady and another guy named Bill Belichick. It’s unlikely that Doug Marrone and his coaching staff have the tools to know how to pull off the epic upset.

That’s why it was so important that the first graders at the Bolles School in Jacksonville figure out the gameplan for them.

So some first graders from a Jacksonville school have some advice for the Jaguars on Sunday… pic.twitter.com/SWDOXIaWpq

Per ESPN, the first graders sent a folder filled with encouraging messages and other notes to Marrone so that he should share their insight with the team. Ever the fan of folders and binders, they knew exactly how to get the head coach’s attention.

“This is from the Bolles first grade, and this has the answers that maybe I’m looking for, maybe how we can stop the Patriots.”

“We’re just taking as much advice as we can because we need it,” Marrone said.

He’s not kidding. The Jaguars are 1-10 all-time against the Patriots and 0-7 in Foxborough.

Trying to beat the Patriots? Some first graders in Jacksonville might've provided the answers to Doug Marrone and the Jaguars. pic.twitter.com/tQXi2BrDFx

Before Marrone and the Jags write off those first-graders, they might want to consider that some pretty talented people started out there, including Chipper Jones, Amelia Lewis, and acting FBI director Andrew McCabe. They might be young, but Bolles kids seem to know what they’re doing.

And if they’re right, there’s going to be a whole lot of bologna to share come Monday.