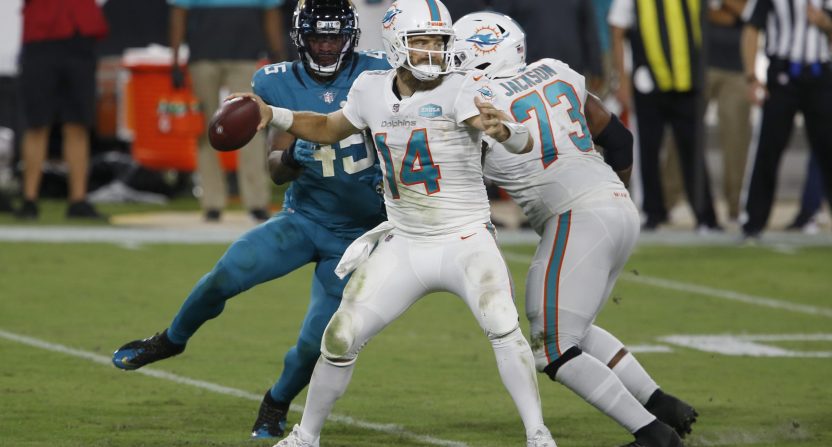 Tua Tagovailoa is the future in Miami, but Ryan Fitzpatrick may hold off that debut for a while. Fitzpatrick completed his first 12 passes and 18-of-20 overall, to lead the Dolphins to a 31-13 road victory over the Jacksonville Jaguars (a 2.5-point favorite) on Thursday Night Football.

Fitzpatrick only threw for 160 yards and the Jaguars outgained the Dolphins 318-294, but that’s misleading. Miami scored touchdowns on first three drives, with Fitzpatrick connecting with Preston Williams and Mike Gesicki for two of those scores.

Ryan Fitzpatrick connects with Preston Williams for a Dolphins TD on TNF. pic.twitter.com/iRjJaDI3r6

Ryan Fitzpatrick is 11-for-11 for 123 yards and two touchdowns (152.8 passer rating). The Dolphins have touchdowns on all three of their drives. pic.twitter.com/CsgiNpmtxf

From there, it was the Dolphins using the clock on offense (the 37-year-old Fitzpatrick even had 38 rushing yards and a rushing touchdown), and playing great defense. Miami had four sacks and forced a fumble on one of those inside the Jacksonville 10-yard line.

This is not going well for the Jags. pic.twitter.com/WGntTFXOBh

Gardner Minshew II really, really missed wide receiver D.J. Chark, who was ruled out with a chest/back injury. The Jacksonville wide receivers played poorly and didn’t offer the downfield threat Chark does, with Minshew relying on rookie undrafted back James Robinson — six receptions, 83 yards — in a short passing game. Minshew has been very impressive this season, but he’ll need a lot of help for the Jaguars to be a decent offense.

Both of these Florida teams will leave Week 3 with 1-2 records. The Dolphins will need to score a lot to keep up with Russell Wilson and the Seattle Seahawks in Week 4, and the Jaguars will face rookie quarterback Joe Burrow and the Cincinnati Bengals.