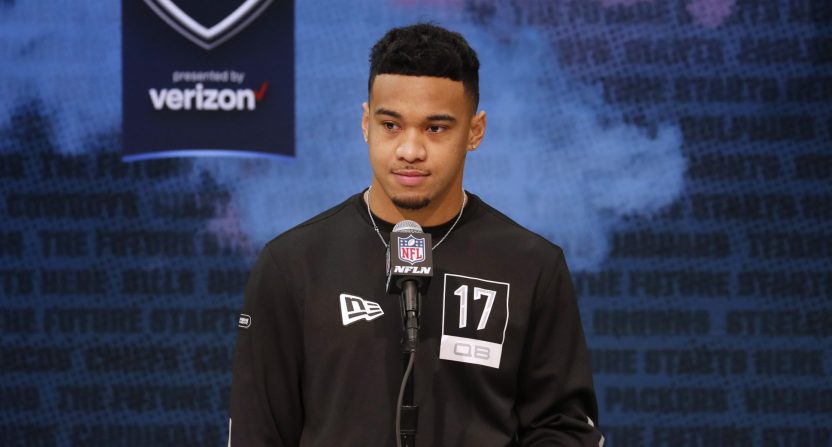 The opening round of the 2020 NFL draft takes place Thursday night in an entirely virtual format. With that in mind, here are five burning questions regarding one of the most highly anticipated nights on the annual NFL calendar.

Where will the quarterback carousel stop?

It’s pretty clear the Cincinnati Bengals will draft quarterback Joe Burrow first overall, but after that it’s anyone’s guess at the quarterback position.

Tua Tagovailoa was considered to be a potential No. 1 overall pick in the fall, but there are now major questions about his health and durability. There are also questions about Justin Herbert’s consistency and Jordan Love’s turnovers. Logically you might still expect the Miami Dolphins, Los Angeles Chargers, and Jacksonville Jaguars to chase those three with their top-10 picks, but it’s complicated with Cam Newton and Jameis Winston still lingering on the free-agent market. It’s entirely possible all three of those teams pass on signal-callers.

Will successors be drafted for Tom Brady, Drew Brees, and/or Aaron Rodgers?

Instead, what if Tagovailoa ends up in New England? What if the New Orleans Saints take Love? What if Herbert drops to the Green Bay Packers at 30? Could those juggernauts really pass on quarterbacks? The Brady era is over, Brees is 41 and the 36-year-old Rodgers hasn’t been the same in recent seasons. Any of those three passers could wind up with any of those three teams in the bottom half of Round 1, especially if the Chargers and Dolphins roll with Newton and/or Winston, and the Jaguars decide they’re good with Gardner Minshew II.

Ngakoue wants out badly and the Jaguars look willing, rumors continue to swirl regarding Beckham, and you’d have to think the Washington Redskins will eventually pull the trigger on a Williams deal. All three are Pro Bowl-level players in their prime, and they all play for teams that possess top-10 picks. If you’re a contender looking to move up, it might be worth selling the draft farm for a top-10 pick as well as one of those three stars.

What will the Detroit Lions do?

The Lions are rarely the center of the NFL world’s attention, but with the Bengals and Redskins extremely likely to take Joe Burrow and Chase Young in the top two spots, this draft will really heat up when Detroit is on the clock in the No. 3 spot. The Lions don’t really need a quarterback, so they’re likely to entertain trade offers for anyone interested in moving up for Herbert or Tagovailoa. Alternatively, they could stand pat and draft highly-touted cornerback Jeff Okudah, in which case they’d be the first team this century to draft a defensive back with a top-three selection. If that happens, it might be an indication the quarterbacks will fall.

What new trends will be set?

The draft might not remain virtual beyond this season, but if the online process runs smoothly on Thursday night, a lot of teams might decide they prefer that approach to the live one. At the very least, I’d watch for certain elements of this year’s draft to stick. Watch for scouts and team executives to travel less and utilize technology more in the pre-draft process, simply because it’s more efficient and cost-effective. This year’s draft will be weird, but it should also be fun and unique, and it might cause us to learn some things that can be applied in future years.