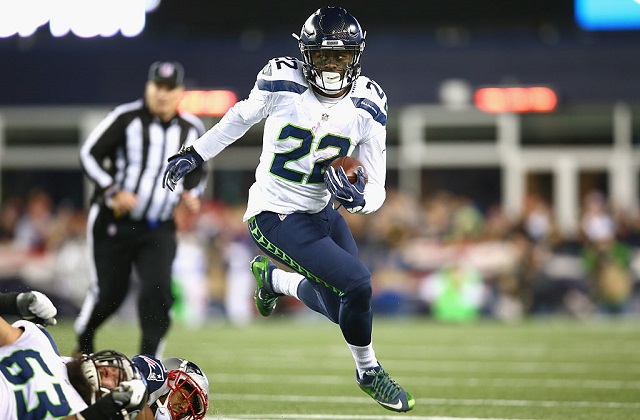 Week 11 is put up or shut up time in the race for playoff spots in fantasy football leagues and the hunt for sleepers could separate the champions from the “wait til’ next year” fantasy owners this season.

From late season bloomers to players who have hit the waiver wire due to injuries or bye weeks who have seen a return in value, there is a little bit of everything on the list of sleepers to watch this Sunday as we head towards Week 11. If you want to increase your odds of a playoff berth and bragging rights come December, you will need to keep these five players in mind this week:

C.J. Prosise is coming off his best game and is owned in just 58% of fantasy leagues.

Pick him up while you can. pic.twitter.com/BDEBfHP6my

C.J. Prosise is the top waiver wire target this week and for good reason, after the Seattle Seahawks made the running back their primary option in their 31-24 win over the New England Patriots. Prosise’s effort in the win was enough for the Seahawks to part ways with Christine Michael this week, and there are expectations that Prosise will remain a high work rate back for the remainder of the season.

With a 36 percent jump in ownership on Yahoo! leagues, more than a few league championships in pools across the country could fall on Prosise’s production over the final weeks of the fantasy season. If you can still miraculously land him this weekend, make sure to lock up Prosise and hope he continues to be a heavy target back who can catch passes out of the backfield for all important points in PPR leagues.

It is strange to see Steve Smith Sr. as a fantasy sleeper after years of being a stud for owners during his Carolina Panthers days, but the veteran wideout has been a quietly solid option at WR/Flex this season at the age of 37. The potential future Hall of Famer has managed to keep his spot on the Ravens depth chart for yet another season, continuing to demand targets from quarterback Joe Flacco by abusing cornerbacks who are often a decade younger than him.

Beyond the narrative of an elder statesman humbling the new era of cornerbacks is a high target rate that makes Smith an enticing option for those who need a wideout who can have high upside, while also possessing a consistent amount of potential points. After a return from injury in Week 9, Smith has had seven targets in each of his last two games and a touchdown catch last week on Thursday Night Football against the Browns. Pre-injury, Smith had consecutive weeks with 11 targets from Flacco, which further drives home the fact that you should have the cagey veteran in your lineup for a consistent Flex option who is just back in his groove as the fantasy stretch run heats up.

Will Tye is not a particularly flashy tight end. In fact, he might be one of the worst starting tight ends in the league, depending on who you ask. However, as the New York Giants’ primary option, Tye does have some value as a super sleeper for those who need an emergency replacement. He has a surprisingly high target rate for a player who only draws headlines in the Big Apple for his wide-open drops.

Tye has received 7.5 targets per game in the two weeks since the Giants’ bye and despite the odd awful drop, has done enough to surpass Larry Donnell to become Eli Manning’s preferred tight end option. Without a touchdown in both of those games post-bye, it is only a matter of time before one of Tye’s targets comes in the end zone as teams focus on stopping Odell Beckham Jr. If you can swallow the anger of watching Tye drop an open target or two, his two percent ownership rate in Yahoo! leagues makes him a player who can be easily added as a fill-in for a week against a Chicago Bears defense that Manning should pick apart through the air.

Robert Woods presents a perfect situation for fantasy owners this week after a breakout game against the Seattle Seahawks on Monday Night Football in Week 9. The Bills’ Week 10 bye prevented Woods from gaining traction as a waiver wire addition and as a result, the Bills’ top target in place of the injured Sammy Watkins is owned in less than 50 percent of leagues across the NFL/Yahoo/ESPN services. That has kept Woods’ fantasy value high as Buffalo preps for a favorable matchup for their offense in Week 11.

The Cincinnati Bengals’ weak defense against top wideouts in recent weeks also makes the case for Woods as one of the best sleeper options this week. The once-vaunted Bengals secondary has been burned week after week as of late, thanks to the decline of Pacman Jones. With quarterback Tyrod Taylor in the best run of his career, Woods should be able to exploit favorable matchups in Week 11. It isn’t often a wideout who had 13 targets in his previous game is as readily available as Woods is this week and his upside over the rest of the season alone makes him one of the best waiver options this weekend at any position.

The Alshon Jeffery PED suspension has created a mini-market for Chicago Bears wideouts this week with targets now up for grabs for the next four games. The news is awful for Bears fans and Jeffery’s bank account, but presents an excellent opportunity for fantasy owners quick enough to scoop up the value that his absence will create in the fantasy world.

Cameron Meredith appears to be the player who should receive the bulk of the attention in Jeffery’s absence. Meredith was lost in the shuffle once quarterback Jay Cutler returned, notching three straight games with just two targets. But with no Jeffery, there could be no choice but to target the second-year wideout out of Illinois State.

Due to the small number of targets for Meredith with Cutler at quarterback, Eddie Royal could be the safer sleeper bet if you are looking for guaranteed targets. However, Meredith is the big-play threat with two 100+ yard performances and two touchdowns this season. If Cutler was wise, he would be trying to get his young stud involved in the attack to compensate for the lack of Jeffery going forward.